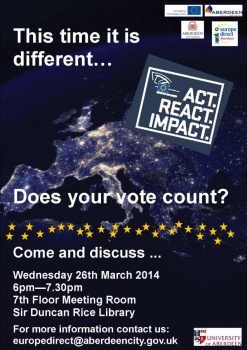 
The University of Aberdeen’s European Documentation Centre, located in the Taylor Library, is one of approximately 40 EDCs in the UK and forms part of the Europe Direct Network. EDCs were established in academic institutions by the EU to support teaching and research. They contain the official publications and documents of the EU institutions. Europe Direct Aberdeen, located in the City Library, provides EU information for the general public.