In Finland, the recognition of children’s rights to agency and voice in the educational process has a long-standing tradition. These rights are further underscored in the process of developing the new national core curriculum for Finnish preschool and basic education.

The latest school curriculums in Finland emphasize students’ participation as well as the development of school cultures. Democracy, equality and human rights also belong to the core of the Finnish educational system, and they are essential in citizenship education (Finnish National Board of Education 2014). Children's involvement and possibility to influence matters related to themselves promotes the child's growth into an active citizen and gives preparedness to act in the democratic and equal society of the future.

School has a big influence on the wellbeing of primary school aged children as an influential development environment. Discussion related to school is often only between the adults. How do the young themselves see their possibilities of participating and how do the participatory mechanisms that currently exist in schools meet their individual desires?

Within the context of democracy in educational practices, the objective of this on-going research project is to find out in what way are involvement and equality practiced in the school culture. This paper is written from an empirical point of view. On the basis of the research material concerning children's involvement as well as its analysis, it will be possible to develop the concept of an involvement culture of children in a goal-oriented way, equally emphasizing the point of view of everyone – including the quiet children.

The whole school structure appears to be, in a way, a learning community and a practice ground for growing and inspiring children into being or becoming active citizens. Children's involvement and the possibility of influencing matters related to themselves, promotes the child's growth into an active citizen and prepares them to act in the democratic and equal society of the future.

Participation at a school level is a good starting point for young people to learn more about the workings of a democracy, about its limitations and potential and to experiment with the rules of democracy in a familiar environment (Kiilakoski 2012). It is important to find out, in what sense are students in primary school to be educated for democracy (Fairfield 2009). Democracy is best learnt in a democratic setting, where participation is encouraged, where views can be discussed openly with freedom of expression and where there is fairness and justice. An appropriate climate is also an essential component for effective learning about human rights (Gretschel 2012). Children need the space, the opportunity and also the support to influence and participate in decisions, and to engage in actions and activities, to contribute to the building of a better society.

In what ways are involvement and equality practised in school culture?

School plays a big part in the wellbeing of primary school-aged children by acting as an important environment for children to develop themselves. Young children tend to have a special interest in what kind of school they find intriguing and what kind of school they wish to study at. The personal experience of a primary school aged-child, being an equal member of the school community and as an expert, has to be taken seriously. Their diversity of experiences, ideas and skills are valuable resources for the whole school society and they have mostly very good ideas. The way that children’s involvement and equality are practiced in school and the ways their involvement in school culture is developed are both important. The role of school in preparing children for democracy is essential and undisputed and school culture from the child’s perspective can only be developed through a child’s own participation.

The same challenges are also seen in civic and citizenship education. Hearing children in the planning school culture, actions, and assessments has been taken into consideration in the latest curriculum of comprehensive schools in Finland. Some of the key goals of the reform include enhancing pupil participation as well as the development of school culture. The views and opinions of young people are respected and valued (Finnish National Board of Education 2016).

There are many ways in which young people can take part in decision making on issues important to them (Suutarinen 2006). Participation is viewed as a pedagogical task which should be taken into account in every social field where children and young people engage, from kindergartens to youth councils. The school democracy, especially in the form of so-called student councils, is returning into Finnish schools. Structures representing pupils at a school level, such as student councils or pupil parliaments, are obligatory in every school representing the opinions and views of young people. Therefore, it is necessary that pupils are involved in democratic structures and processes, have their voice heard and make decisions on issues that impact them and their lives. It is useful to learn that the person who takes decisions also carries responsibility for the consequences of those decisions. 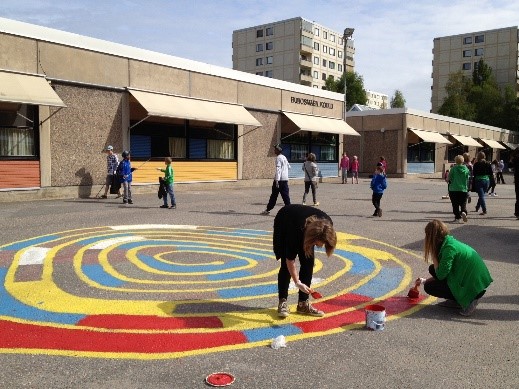 How do children learn the skills of an active citizen?

Finnish legislation and several international agreements create a basis for participatory democracy for children and youth. Many decisions made by municipalities affect the lives of children and youth directly. These decisions are often made without systematically investigating the opinions of the target group or without letting the representative of the group participate in the decision process (Kiilakoski 2012). Young people have the right to be involved in democratic structures and processes, have their voice heard and make decisions on issues that impact their lives – they want to contribute and share their views.

The school council or parliament should be a space where a meaningful dialogue and a partnership between pupils and local authorities can be created, so that all the actors involved can observe tangible benefits of such co-operation. Children and young people as local citizens bring a different and fresh perspective when looking at local issues. Meaningful participation meets many challenges and they are related to the characteristics of town planning processes which are usually large-scale, time-consuming and multi-professional. In order to become more meaningful, young people’s participation seems to need at least the following requirements: both individual and organizational commitment, true opportunities to have an influence throughout the planning process and a possibility to make some small improvements at a quicker pace.

The aim of the research

Child welfare work in schools in Finland is a supportive structure that takes care of children’s physical, psychological and social wellbeing. Its aim is to create a healthy and safe environment for learning and growing and promote the wellbeing of the school community.

Children's welfare and involvement have been studied in Finland from the point of view of school health care, health education and social politics, but less from the educational point of view of analyzing primary school aged children's own experiences (Alanen et al 2015, Hiilamo 2008, Salmi 2012). The objective of current research is to find out the present stage of participation and possibilities to influence as experienced by primary school aged children as well as to analyze the experiences and beliefs of involvement and influence.

On the basis of research material concerning children's involvement as well as its analysis, it is possible to develop the involvement culture of children in a goal-oriented way equally emphasizing everyone’s point of view. The objective of this study is also to strengthen democracy as a basic value in education.

How do children themselves see these possibilities in terms of participating and how do the participatory mechanisms currently existing in schools meet their individual desires? From an educational point of view, the personal experience of a primary school aged child as an equal member of the school community, and as an active social person, is an interesting research topic.

The framework in this research is socio-constructivism and the theoretical context of the research is inspired by John Dewey theories, which contains the relevant perspective of democracy education. This research is also based on the participatory methodologies such as ‘Ladder of youth voice’ designed by Roger A. Hart (1992). In this model of participation Hart presents an eight-step model that begins with non-participation: (1) manipulation; (2) decoration; and (3) tokenism. The model ends with degrees of participation: (4) assigned but informed; (5) consulted and informed; (6) adult initiated, shared decisions with children; (7) child initiated and directed; and (8) child initiated, shared decisions with adults.

Based of Hart’s ideas, Harry Shier (2001) developed a model of five levels of participation. (1) Children are listened to; (2) Children are supported in expressing their views; (3) Children’s views are taken into account; (4) Children are involved in decision-making process; and (5) Children share power and responsibility for decision making.

In the educational literature the concept of participation does not have one shared definition. The concept refers generally to the process of sharing decisions that affect children’s lives and the life of the community in which they live. It should start with children and young people themselves – on their own terms, with their visions, dreams, hopes and concerns (Hart, 1992; Shier, 2001).

A mixed methods approach is employed utilizing the approaches of quantitative survey research and the qualitative content analysis review. The quantitative material (n=471) has been collected by means of a questionnaire done among primary schools, girls and boys of fifth grade from thirty different Finnish speaking primary schools. The qualitative part of the research (n= 50) has been collected from primary schools through group interviews. The reason for collecting qualitative material was to make clearer the findings and statistics.

Pupils’ voices and participation have received increased attention in the past decade, a development which is often attributed to the ratification of the United Nations Convention of the Rights of the Child (UNCRC, 1989; Lundy, 2007). There is growing research interest in listening to pupils’ voices and supporting their participation in their school lives, because in Article 12 of the UNCRC it is stated that a child shall be provided with the opportunity to be heard.

All the pupils at school, including the quiet individuals, want to have the possibility of having their say about different issues, to be heard and to have their views taken seriously. Skills of democracy and active citizenship can be learnt in a safe group in which everyone has permission to express their own feelings and opinions. Within the context of democracy in educational practices, it is interesting to find out in what ways involvement and equality are carried out in the school culture and how they differ between schools.

On the basis of the research material concerning children's involvement as well as its analysis, it will be possible to develop the concept of an involvement culture of children in a goal-oriented way, equally emphasizing the point of view of everyone.