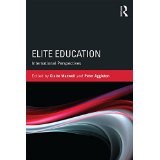 Dr. Joan Forbes, Reader in Education at the University of Aberdeen, and Professor Gaby Weiner, Visiting Professor, University of Sussex, Centre for Higher Education Research, have a chapter on elite schooling in Scotland in a new book: Elite Education. International Perspectives. The book is edited by Dr. Claire Maxwell (Institute of Education, University College London, University of London) and Scientia Professor Peter Aggleton (University of New South Wales, Australia) and published by Routledge.

The title of Joan Forbes and Gaby Weiner’s chapter is: ‘Independent’ in Scotland: Elite by Education?

The chapter examines the system of private and elite schooling in Scotland, historically and today. It is one of several country-level case studies in the book, which together provide an in-depth account of elite education systems globally.  The chapter addresses the central sociological question of how privilege is reproduced by and through education.  An initial discussion of what it means to be ‘elite’ in Scottish education is followed by a review of the literature on Scottish private and elite schooling.  The role played by the Scottish capital city of Edinburgh is highlighted since fully one quarter of the city’s pupils attend private schools.  Discussion then turns to the Scottish Independent Schools Project (SISP), and its research into capitals, power, space, gender and reflexivity, in order to identify the specific practices and processes of elite schooling in Scotland today.  In closing, it is suggested that to better understand the power of Scottish elites, research is needed on how the country’s elite schools continue to play an important role in the production of ‘persons of influence’ or ‘state nobility’ (Bourdieu 1996).

Joan Forbes and Gaby Weiner’s new chapter is the most recent in a series of outputs from the Scottish Funding Council supported Applied Educational Research Scheme, Schools and Social Capital Network, Scottish Independent Schools Project (SISP).  Additional funding for the project was given by the University of Edinburgh, Godfrey Thomson Trust.

Designed to investigate issues relating to contemporary societal inequity and disadvantage and social mobility and social justice, the overall research project used cultural analysis and social theory, to develop and apply innovative research methodologies.  The SISP studies contribute to the strength of the University of Aberdeen School of Education research themes and THEORY SPACE agenda (The Theory Space).

Elite Education – International Perspectives makes 'a particularly original contribution to the debates’.  It 'disrupts and challenges more orthodox ideas on privilege’.  And ‘rather than provide answers, this collection raises more questions and opens up the debate, injecting it with stimulating and contentious ideas’ (Gill Crozier, Book Review (2015) in British Journal of Sociology of Education, 36.7, 1115-1123).