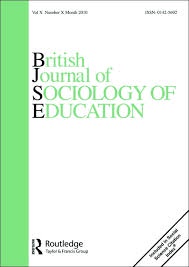 Dr. Joan Forbes, Reader in Education at the University of Aberdeen, and Professor Bob Lingard, School of Education, University of Queensland, Brisbane, Australia, have a new paper on 'assured optimistic' cosmopolitan girls - 'global girls' - published in the British Journal of Sociology of Education.

The title of the new international journal paper is: Assured optimism in a Scottish girls’ school: habitus and the (re)production of global privilege.

The paper uses the intellectual resources of Bourdieuian sociology on elite schooling and the (re)production of privilege and distinctions to explore the intensive academic and co-curricular work of an elite girls’ school in Scotland in the production of ‘global girls’.  These girls perform outstandingly academically and optimistically aspire to post-school education in high status universities – as a segue to professional careers based on their high academic attainment and wider achievements.

Joan Forbes and Bob Lingard's paper offers 'new planes of thought on privilege' and 'a new concept of 'assured optimism' derived from Bourdieu's habitus theory'. " Jane Kenway and Aaron Koh, Editors of the British Journal of Sociology of Education

The journal issue editors locate Forbes and Lingard’s paper within ‘more recent waves of research [that] are sensitive to matters of gender and race’, and in studies which ‘tell us a great deal about the contemporary constitution of femininity and sexuality amongst the more, and the most, privileged and powerful sectors of our national and increasingly globalizing social worlds where gender, race and class and indeed neo-liberalism come fiercely together’.

Joan Forbes and Bob Lingard’s new article is the most recent in a series of outputs from the Scottish Independent Schools Project (SISP) of the Applied Educational Research Scheme (AERS).  The SISP investigates economic wealth and advantage as the other side of poverty and inequalities.  Funding for the project came from the Scottish Funding Council and from the Godfrey Thomson Trust, University of Edinburgh.  AERS research was also supported by the University of Aberdeen.

Designed to investigate the discourses and practices that shape inequalities and in/exclusions in contemporary elite school institutions and society, the overall project uses cultural analysis and social theory and seeks to develop and apply innovative research methodologies.  The SISP studies contribute to the strength of the University of Aberdeen, School of Education, THEORY SPACE research agenda (The Theory Space).