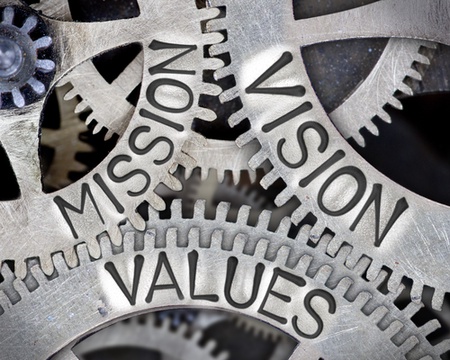 For many budding organisational leaders a constant question is: how do I manage those around me to achieve organisational success? Of course there is no shortage of advice out there. Airport lobby shops are crammed full of management self-help books that tell us that by following 3, 5 or 7 golden rules success will inevitably follow. These are appealing because they reduce our complex world into bite-sized chunks and offer a means to eliminate our social anxieties. But I hazard a guess that many of these books become just another source of background noise after an initial surge of enthusiasm followed by a disappointed experience.

For organisational leaders one commonplace element of advice is that a cornerstone to success is the articulation of that organisation’s “vision, mission and values”. By offering colleagues an inspiring vision of the overriding social purpose of the organisation, coupled with the values that the organisation will live by, the expectation is that they will “get on board” and work together to achieve that purpose. In other words they will be motivated to act and perform in a manner conducive the achievement of success for the organisation. Enthused by the promise this offers, many leaders go through the exercise of carefully crafting the vision, agonise over how that can be operationalised into a mission, and then lend moral and ethical support to it in the form of a number of apparently unproblematic statements of values that few could argue with: integrity, honesty, respect and fairness. Yet despite this, success often appears more difficult to find in the day to day grind of organisational life. Why is this?

One way of thinking about this is by reference to interests. Behind the promise of the vision, mission and values statement is the premise that all people within the organisation, and sometimes even those outside it, can share a common interest. This is called “unitarism”. If everyone shares that interest then it can naturally be assumed that all people will say and do things that support the vision. If the vision is compelling then this must be right? Well, not always.

An alternative view to unitarism is “pluralism”. Pluralism involves the acceptance that within any organisation there exists multiple interests. Moreover, often those interests, despite what some books may say, compete with one another. At the most obvious level this might manifest in wage negotiations: the employer has an interest in keeping wages down to maximise its interest in generating profit, and the workers have an interest in maximising wages to support their needs and aspirations. But interests go much deeper than this: they manifest in myriad smaller ways that appear day to day, including such as who gets to do the most interesting work, who gets their own office or car parking space, who gets the chair next to the window, who gets the encouraging words or a smile from the boss, and so on. Each of these can operate to separate individuals from the vision by reference to a clash of interests.

But are people truly driven solely by reference to their own interests? If this were true then people would have no hesitation in using force or fraud to get what they want. Yet most of us don’t. Why not? The answer is that we have moral and ethical values. Usually formed in the first 2 decades of our lives, we have a set of codes of right and wrong which guide us. But not only that, they also allow us to evaluate the actions of others. Part of those codes is that people should keep their promises: something that the German philosopher Immanuel Kant told us was an ‘universal’: something that always should be done. And this is where the importance of the values element of the ‘vision, mission and values’ statement comes in. When organisations use apparently pithy statements of values such as integrity and fairness, people expect those organisations to live by those values. In other words these aren’t empty words that can be put to one side when it seems expedient to do so. Those words are promises.

So what is the moral here? Making a statement of values is perhaps the part of the ‘vision, mission and values’ that organisations spend least time on, but conversely is the most important element. Why? Because although the vision and mission are important in setting an overall goal, they are ‘out there’, something that is a future rather than a day to day element of mundane organisational life. On the other hand values are promises of how you will act at all times. Failure to do so will be seen as a broken promise. And when someone breaks their promises they release others from the obligation to keep their own implied promise to act fairly towards the organisation and colleagues; and to act so as to pursue the vision. When that happens the vision and mission are almost inevitably prejudiced. So remember to place value on values: it may be the most important thing you ever do.

Dr Scott Allan is a Lecturer in Management Studies. He teaches courses in business and management such as Leadership, Interpersonal Management, Negotiation and Persuasion. In addition Scott undertakes research in the field of organisation theory, with a particular emphasis on the professions and management of professional services firms.