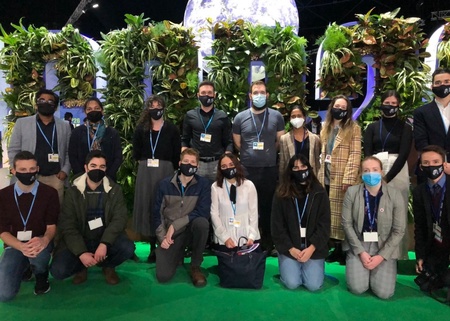 This blog was written by Dr Shamima Haque for The Institute of Chartered Accountants of Scotland, you can read the original article here.

The COP26 event, held in Glasgow from 31 October to 12 November 2021, was a United Nations summit about tackling climate change. Around six years ago, delegates (heads of states, global leaders, NGO representatives and observers) to COP21 in Paris promised rapid reductions of greenhouse-gas (GHG) emissions by countries around the world by 2050 to avoid the world passing the 1.5°C threshold by the end of the century. This is known as the “net zero” target, but these reductions are not yet happening at the necessary pace or scale to achieve this aim. Amid significant concerns by NGOs and climate protesters over ‘green washing’, at COP26 the global leaders came together to make pledges on achieving this net zero target and taking credible actions against climate change.

I attended the first four days of COP26 as an observer for the University of Aberdeen. On day four, the issue of climate finance was addressed. Climate finance was first introduced at COP15 in 2009 in Copenhagen, which promised that developed countries (Annex I countries with high GHG emissions) would provide $100 billion a year by 2020 in climate finance to help developing countries (non-Annex I countries) to fund mitigation and adaptation to climate change. Funding can come from public and private sources and be provided in different forms. The $100bn commitments were reiterated at COP16 in Cancun in 2010, and at COP21 in Paris in 2015, although the $100bn goal has not been met any year since. COP26 aimed to ensure that the pledge will be met going forward, and that the global financial system will properly align with the Paris declarations, driving a transition of the global economy and enabling all countries to move towards net zero by 2050.

The role of finance institutions

On finance day there were also discussions on how financial institutions (banks, insurers and investors) can align their own businesses, and their lending and investing, with net-zero goals and promote a smooth but rapid decarbonisation of the economy. It was announced that financial institutions  accounting for around 40% of global assets would deploy $130 trillion (£95.4 trillion ) as a part of a long-term plan to combat global climate change. This is a consortium of over 450 financial firms across 45 nations, known as the Glasgow Financial Alliance for Net-Zero (GFANZ) and chaired by Mark Carney on behalf of the UN climate envoy.

The need for transparency and accountability

The big challenge is, however, how the money will be managed and controlled. On finance day, there were discussions over challenges; for example, there is currently a lack of clarity and transparency in relation to the measurement and calculations of climate finance, and over the governance and accountability issues to be considered during the raising of finance and its deployment. Also, no clearly established accounting rules exist under the United Nations Framework Convention on Climate Change (UNFCCC) and each developed country is able to decide what it reports as “climate finance” (see Roberts et al., 2021). There were also discussions about how finance is needed both for “mitigation” (large-scale investments are required to significantly reduce emissions) and for adapting to adverse effects and reducing the impacts of a changing climate. More than 80% of the funds committed to date have been provided for mitigation activities rather than adaptation. Mitigation effort has been prioritised because returns from mitigation investment can be realised sooner than those from adaptation and that, being a public good, the private sector sees little incentive to invest in climate change adaptation unless it is directly impacted (see Timilsina, 2021). There should be as much focus on adaptation as there is on mitigation because climate change and natural disasters disproportionately affect the poorest and most vulnerable populations. There are also concerns for developing countries over the form climate finance takes, as most climate funds are public funds provided as loans rather than grants, therefore increasing the burden on developing countries, which naturally are calling for the proportion and value of grants to increase.

While effective mobilisation of finance will be critical to accelerating the transition towards net zero, information about how corporate and financial institutions manage and account for climate change is also imperative. Fossil fuel companies, which carry a major responsibility for GHG emissions, have a history of denying climate change, lobbying on one side of the climate change debate and demonstrating limited accountability in relation to climate change and related disclosures (see Haque, 2015; Haque and Deegan, 2010; Haque et al., 2016).

To make companies responsible for their actions, an important step would be to develop common industry standards and best practice that is aligned with the 1.5°C Paris objective. At COP26, Erkki Liikanen, the chair of the International Financial Reporting Standards Foundation (IFRS), announced the establishment of a new International Sustainability Standards Board (ISSB), and the development of a new “prototype climate change-related disclosures” that require entities to provide information about their exposure to climate-related risks and opportunities. However, while widely acknowledged by governments and regulators, there are significant uncertainties around the adoption and adherence prospects of the disclosure standards, particularly relating to global harmonisation and implementation by regional and national authorities.

So, what came out of the climate finance day at COP26? Well, we know that the money is there, as Carney says, but we need effective mechanisms to align it with net zero. In doing so:

Accounting professionals can play a major role here, especially in ensuring the transparency and accountability in relation to climate change-related disclosure. They need to ensure effective measurement and verification of climate change-related data, and provide relevant information to the investors and other stakeholders. They also need to work on achieving harmonised accounting and disclosure standards that are reliable, comparable and relevant.  A collaborative approach with businesses, governments, regulators and stakeholders would be crucial for accounting professionals to achieve this.