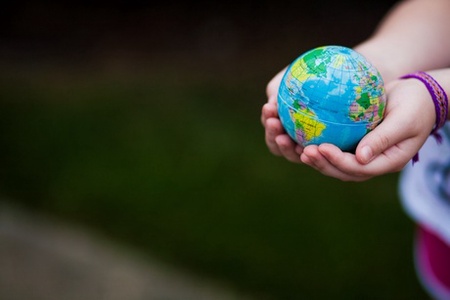 With COP26 taking place in Glasgow this month, everyone is talking climate change. How can we save our planet? While political and business leaders from around the globe are debating the issue, we’ve been looking closer to home and asking the next generation for their ideas.

I recently enjoyed a day at Dunnottar primary School in Stonehaven where we tasked a group of primary seven pupils with using their knowledge and understanding about climate change to design a game which could educate others.

The workshop began with a group discussion with pupils about climate change, giving them a University-type experience and providing some background on marketing terminology and techniques before we asked them to get to work.

The students developed their networking skills to carry out some market research into games. They discussed the importance that games have in developing skill sets and what makes a good game before coming up with their own ideas of a game which would educate their chosen target audience.

We then staged a Dragon’s Den-style presentation showcasing their ideas, with the expectation that one lucky group will have their entry chosen to be submitted to a climate change game design competition being run by the Business School.

What did I learn? It was a privilege delivering this workshop to such enthusiastic young people. They engaged fully with the project and developed their employability skillset to create and present their ideas of a game that would educate others.

From computer games, to altering games already in existence to coming up with their own ideas - the pupils certainly had very creative ideas.

It is also a topic they, like us, are clearly very passionate about. The University of Aberdeen last week become one of 1050 universities and colleges from 68 countries to pledge to half our emissions by 2030 and reach net zero by 2050 at the very latest.

Universities and colleges have signed up to the Race to Zero for Universities and Colleges, which is an initiative led by EAUC – The Alliance for Sustainability Leadership in Education and Second Nature with support from the UN Environment Programme (UNEP).

The initiative recognises the substantial role of the education sector in the global Race to Zero and the influence that universities and colleges have to shift mindsets, influence lifestyle choices, and instil sustainability values and green skills into the leaders of tomorrow.

By setting progressive targets, the initiative can have far-reaching impacts well beyond campuses. As hubs for research and innovation, universities can scale up the role of higher education in the green transition.

As Nigel Topping, the UK Government’s high level climate action champion for COP26, said: “Higher education institutions have the power to redesign the future. Not only are universities, colleges and schools committing to ambitious decarbonisation plans; these institutions also have the capacity - and indeed the responsibility - to support and educate our leaders of tomorrow.”

The workshop and competition are open to schools at both primary and secondary level across Aberdeen city and Aberdeenshire. Any schools keen to take part can contact me direct at p.cumming@abdn.ac.uk