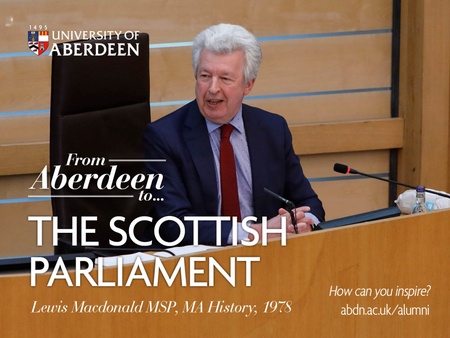 Lewis Macdonald describes his journey from Aberdeen to The Scottish Parliament where he was MSP for the North East of Scotland and Deputy Presiding Officer.

Your Time at Aberdeen

Why did you choose to study at Aberdeen?
Aberdeen was my nearest university, but still far enough away to let me leave home and move into student halls! My big sister and older friends had told me it was a good place to go, and they were right!

Why did you choose your particular course?
History had been my strongest subject at school, and First Year at University confirmed that was the degree for me. Understanding what has happened and why to get us to where we are has always been what has fascinated me most. I tried Economics in my last year at school, and Sociology in First Year at University, but I concluded that History still provided the most rounded and insightful approach.

What did you most enjoy about your time at Aberdeen? Did you have any particularly memorable student experiences?
I loved the fact that we were treated as adults from day one, while still having a supportive environment for learning many of the aspects of life which we as teenagers did not yet know. I enjoyed my time as an under-graduate socially, academically and politically – probably in that order! The same was true of my time as a graduate student, although completing the thesis eventually had to take priority over everything else.

If you were involved in any clubs and societies as a student, what did you enjoy most about them and what benefit do you think they have for students?
I most enjoyed the camaraderie, social events, shared interests and new insights. While university is a great place to meet people, student clubs and societies allow you to go beyond your own class or year to meet students on other courses, in other years and other universities, as well as people with shared interests from the city and beyond. They are also learning places in themselves, and offer opportunities for setting goals and achieving objectives outwith the academic syllabus.

Did you hold any student leadership roles, e.g. Class Rep, Club Treasurer, Social Convenor?Yes, I was as Class Rep a couple of times, helped run a couple of student societies and was elected several times to the Students’ Representative Council (now AU Students’ Association). I enjoyed all of these experiences at the time, and they have since stood me in good stead in my professional career.

If talking to a group of prospective students, what advice would you give them to help them make the most of their time at the University of Aberdeen?
Enjoy it, work hard and play hard, give new things a try and don’t hold back! The more you put in the more you will get out, and the more you will benefit from your time at Aberdeen.


Your Time After Aberdeen

What did your first role involve?
I was the first member of staff appointed by a voluntary organisation which had just obtained start-up funding from the Commission for Racial Equality to promote good community relations in Grampian (Aberdeen, Aberdeenshire and Moray). My first priority was to secure, equip and organise a public opening of the organisation’s first office in Aberdeen city centre. I also reached out to local authorities and other public bodies to promote racial equality awareness and training, acted as a first point of contact for people seeking help or advice on racial equality issues, and reported to the Board once a month. My last task was to advise on the appointment of my successor.

What is your current job title?
Member of the Scottish Parliament.

Who is your current employer?
The Scottish Parliament (although I am classed as the holder of a public office, not an employee).

What is your current role?
I have been a Member of the Scottish Parliament since 1999, representing Aberdeen Central as a constituency MSP until 2011 and representing North East Scotland as a regional MSP since then. My roles at Holyrood have included Government Minister, Shadow Minister, and convener or deputy convener of several parliamentary committees and cross-party groups. I have been Convener of the Health and Sport Committee since January 2017, and I was elected as a Deputy Presiding Officer of the Parliament itself in April 2020.

What is your current location?
My constituency office is in Aberdeen city centre and my parliamentary office is at Holyrood, so I work in both Aberdeen and Edinburgh most weeks. During the coronavirus lockdowns I have chaired both the Parliament and the Health and Sport Committee from my kitchen table, and chaired Cross-Party meetings on International Development online, with guest speakers from and in Africa!

Please briefly describe the journey from your first job after graduating to where you are now
I went from working with GCRC to doing racial equality work with the then Grampian Regional Council, based at Powis Community Centre in Old Aberdeen. I then carried out feasibility studies for draught-proofing and home insulation in neighbourhoods like Torry and Rosemount for the energy efficiency agency SCARF. In 1987, after helping in a successful general election campaign, I was appointed as parliamentary researcher by Frank Doran, the new Labour MP for Aberdeen South. In the following Parliament I worked as Westminster as a Shadow Cabinet researcher with Tom Clarke MP, then came back to Aberdeen to work with Frank Doran again, before being selected to stand for the brand-new Scottish Parliament in 1999. My experience working in the voluntary sector showed me the importance of being able to influence legislation. My experience of working in the House of Commons convinced me the best way to make things happen was to get elected in my own right.

Was your degree at Aberdeen essential for getting to where you are now? If so, in what way?
Yes – my time at Aberdeen University taught me how to get to the root of an issue, and how to make a difference to the outcomes. After studying History as an under-graduate, I combined History with Medical Sociology in my doctorate in African Studies. Both disciplines emphasised the need to get at the facts, and to interrogate other people’s interpretations, and postgraduate research taught me how to turn a large and complex body of information into a clear and concise explanation that others could readily understand. The social and extra-curricular aspects of my university education also gave me vital skills: in networking, identifying goals and objectives, and working with other people to achieve them. Outstanding teachers at Aberdeen like John Hargreaves and Roy Bridges showed me that detached objectivity and respect for other points of view were entirely compatible with passionate commitment to social and political change.


One Top Tip
There’s an old saying about perspiration being more important than inspiration, but the truth is you need both. My advice would be to do the work to understand what’s in front of you, but to trust your instincts too. I’ve been lucky enough to have had jobs focused on things I really cared about, and to enjoy them most of the time – those things really matter too. If you’ve done the work and you feel you’re up for the job, then go for it and don’t hold back!