Dr. Martin A. Mills is Senior Lecturer in Anthropology at the University of Aberdeen, Scotland and Director of the Scottish Centre for Himalayan Research. He specialises in the comparative organisation and structure of governance in religious, state and medical institutions. He has previously lectured and researched at the universities of Edinburgh, St.Andrews and Sussex. Dr. Mills' principal research focus is the anthropological study of Tibetan communities, in particular its religious and governmental institutions. Author of Identity, Ritual and State in Tibetan Buddhism: The Foundations of Authority in Gelukpa Monasticism (Routledge 2003), he has carried out fieldwork in Tibet, Ladakh, China, Northern India and Scotland over the last thirty years. He is a Fellow of the Royal Anthropological Institute and member of the Association of Social Anthropologists of the UK and Commonwealth, as well as member of the International Association for Tibetan Studies and the International Association of Ladakh Studies.

The Scottish Centre for Himalayan Research (SCHR) is an interdisciplinary research centre focused on the Tibetan Plateau and Hindu Kush-Himalaya. Amongst its public duties is to provide research-level briefings to policy makers and parliamentarians, with research and secretariat support provided to the Scottish Parliament's Cross Party Group on Tibet since 2007.

Read the SCHR's latest report to the Scottish Parliament, Climate Change on the Third Pole: Causes, Processes and Consequences (2021).

All anthropologists tend to have two specialisations: one theoretical, the other substantive.

Theoretically, Dr Mills' major research interest lies in the comparative study of authority - whether in political, religious, medical or educational spheres - as a function of legitimate governance. This is not simply in terms of the imposition of command, but also the creation and organisation of social and theoretical truths within populations, and the formation of consensus. Thematically, this core research focus involves a general specialisation in the comparative organisation and structure of governance in religious, state and medical institutions.

In substantive and ethnographic terms, Dr Mills' primary research interest lies in the anthropology of Tibet and Tibetan-speaking areas, and in particular its religious and state life. Over the last three decades, this has involved a progression of research projects focused on the ceremonial nexuses of Tibetan monastic and state life.Such projects have involved the formulation of new ways in which modern ethnographers of Tibetan regions can integrate their work with textual specialists and indigenous scholars to create an historical anthropology of the region.

Ritual and State in Tibetan History

Since 2003, Mills has engaged in extensive research on the indigenous constitutional history of Tibet. This has involved three main areas of research: the study of the political history of the Ganden Podrang, the Dalai Lama's government at Lhasa from 1642 to 1959, and in exile since 1959; the philological study of medieval and modern manuscripts as they relate to Tibetan understandings of legitimate governance, in particular its own mythology of divine Buddhist kingship; and the ethnographic and historical study of the Ganden Podrang's ceremonial practices of statecraft.

At the heart of these issues is a theoretical concern with four issues: 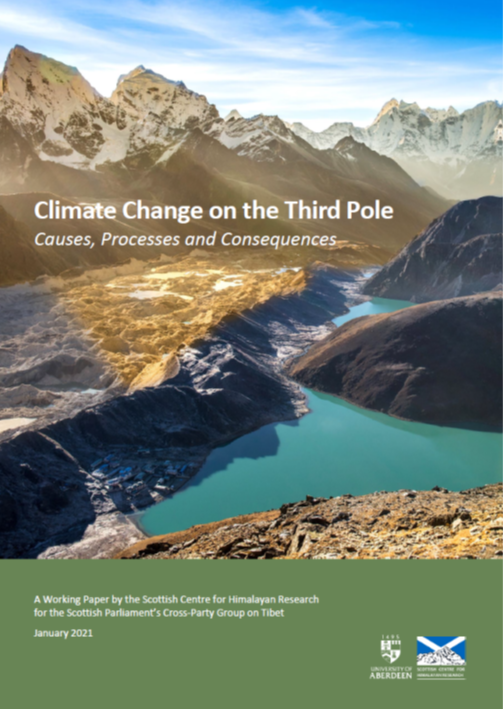 Climate Change on the Third Pole: Causes, Processes and Consequences

Parliamentary report on rapidly advancing climate change on the Tibetan Plateau and its surrounding mountains, and the effects this will have on freshwater resources for all of Asia.

As Director of the Scottish Centre for Himalayan Research, Dr Mills is Secretary of the Scottish Parliament's Cross-Party Group on Tibet, and a member of the Cross-Party Group on China and the Westminster All-Parliamentary Group on Tibet. In his advisory role for these groups, he has authored and co-authored parliamentary briefing papers on public protest, human rights, religious regulation, political sovereignty and international law and environmental change on the Tibetan Plateau (see Publications). He is also Chairman of the Aberdeen Chinese Studies Group.

In doing so, Dr Mills has maintained a wide variety of fruitful collaborations, including amongst others: