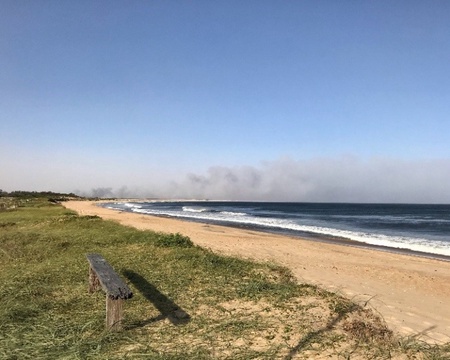 Australia is vast - 7.7x106 km2  and would accommodate Scotland a 100 x over, but with a population of only about five times the size. And as Bill Bryson remarked, ‘it has more things that will kill you than anywhere else’: the world’s top ten poisonous snakes - all Australian; the world’s most dangerous arachnid (funnel web spider) and jellyfish (box jellyfish); and that’s before we consider sharks and crocodiles. Thankfully, I have not encountered any of these - although there were reports of a red-bellied black snake on the Newcastle bush campus, apparently quite common in this region and not as venomous as some of its cousins (?).

And so to the weather. During my time here I’ve encountered: a red dust storm- like haar, but hot and red, which obscured the horizon and coated parked cars and a bush fire a little north of where I was staying. There are six categories of warning for bush fire risk, from ‘Low-moderate’ up to ‘catastrophic’. Thankfully this fire was at the lower end of the scale, but it did require my hosts to review their bush fire survival plan!

Which brings me to the storm that hit Sydney yesterday morning and has even made it onto the BBC news (web and TV). The storm rolled in around 5.30-6.00 am and according to later reports, about a monthly average rain fall, fell in a couple of hours. This caused flash-flooding and major disruption to travel and in some areas power supply and sadly also some fatalities. Strong winds are expected later today, but at present it appears a bright morning.

So reflecting on my first visit Down Under … well I hope it won’t be my last. The people I’ve met have been friendly and helpful, including the lady who served me in a shop yesterday, who it turned out has a law degree from the University of Aberdeen! Go figure -perhaps Scots law doesn’t travel as well as science! Although I’ve only seen a small fraction of New South Wales, which is about a 10th of the country (and 10 x size of Scotland), I have metaphorically speaking been bitten and can’t wait to come back and see more.