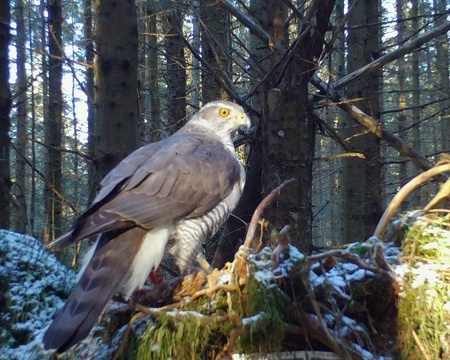 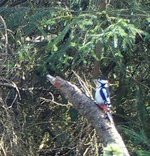 I am a third year PhD student studying the population dynamics of goshawks, an elusive, forest specialist, bird of prey. My aim is to understand the spatial scale of influence that any illegal persecution has on the population. As part of this, I use camera traps to get ring recoveries from my study population in the Scottish Borders and Northumberland.

Camera traps (weatherproof, motion-activated cameras) are an unbelievable piece of equipment that have revolutionised the way we study elusive species. Not only can we see where a species is present, but we also get information on other species’ presence, can identify the ages of individuals and in some cases, individuals themselves.

I set the camera traps up near the goshawk nests with the help of licensed raptor workers and the permissions of Forestry England, Forestry and Land Scotland and Tilhill Forestry. It is illegal to disturb the nests without a license. I get great images, but only approximately 10% of the birds have darvic (colour) rings that are fitted when they are chicks. So how can I maximise the information I get from camera trap surveys?

First, camera traps can tell you what species are present in your study area. Not all of these will be of interest to your study, but they might be to someone else’s. I place my cameras at what I believe are goshawk nest sites, but every so often we get a nest wrong, and it is actually a buzzard nest. I would get this information later in the breeding season once the birds start to moult their feathers, but by knowing this earlier, it gives me more time to track down the goshawk nest.

Another species I often get is pine marten, scent marking or scavenging goshawk prey. This species has been expanding its range back south through Scotland, and my cameras are contributing to the monitoring of this recolonisation. I also get squirrels of both flavours, tawny owls, stoats, woodpeckers, and a range of daring small birds, all of which can make a tasty dinner for a goshawk!

How old is that bird?

If I get a ring recovery, I can tell who the bird is, where it hatched and how old the bird is. But what about the other 90% of our birds? Well, goshawks have a very different plumage in their first year compared to adults (2 years+). If there is a first-year bird breeding, it tells us that the previous bird has either moved away or died. If there is a high proportion of first year breeders in the population, this indicates the population has a high death rate or is still expanding into empty habitat, as was the case when my study population was first reintroduced in the early 1970s.

Ringed birds can clearly be identified, but can we tell individuals apart otherwise? Males and females can be separated, particularly if you get them in the same image. Females are larger, tend to be browner in colour and have bolder stripes across their chest. Males are smaller, generally bluer/greyer in colour and have thicker eyebrow stripes. Also, some birds without a darvic may still have a metal BTO (British Trust for Ornithology) ring. These rings cannot be read from the images, but the presence or absence can tell us if it’s a new bird at a site from one year to the next. There is also potential to use artificial intelligence of the kind used for facial recognition to determine individual identity, but as this is a working progress, you’ll just have to watch this space!

Hover over images above to read the description:

Image 1: An adult female goshawk with a darvic ring on her left leg and BTO ring on her right.

Image 2: This site had buzzards nesting nearby so the female goshawk (right) and female buzzard (left) had a scrap over my bait.

Image 3: This is a pine marten scavenging from a goshawk feeding post. Here we get a clear view of his “bib”, which has his unique patterning so can be used to identify him.

Image 7: The same female goshawk. She was a first-year bird breeding for the first time.

Image 8: One year later where she is an adult goshawk breeding at the same site. I know it is the same individual because of her darvic ring.

Image 10: Adult male goshawk. Note the bolder stripes across the females front, and the broader more defined eyebrow of the male.

Image 11: Zoomed image of the male and female highlighting the size difference.