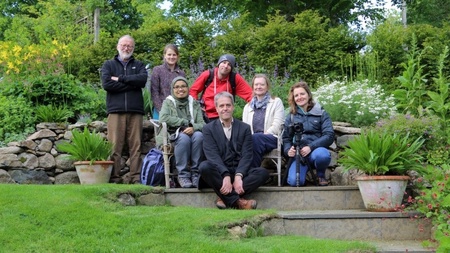 Who knew there were so many talented photographers in the School of Biological Sciences!? The SBS Photoclub discovered them! The Photoclub is a little group which shares photos one to one in a very informal evening session and compiles a monthly collection of submitted photos taken the previous month - and it has been doing that for quite a while now! Amazingly, it passed its 7th anniversary this year. The first meeting was held on Wednesday 30th January 2013. Since then it has held a monthly meeting on the first Wednesday of (almost) every month (except in the summer). The club has sent out 71 compilations of photographs called “SBS Photoclub Photo of the Month”, mostly taken by staff and students (undergraduate and postgraduate) of the School of Biological Sciences. The smallest compilation (the first), had only five submissions.  More typical is 8-15 but 20 does happen. I would guess we have sent round nearly 1000 photos to date (it would take a few hours to count them all)! The number of compilations might be amazing, but so is their popularity.  Many people tell me that the Photo of the Month email is their favourite “work” email.

The club started because of conversations in the tearoom of the Cruickshank Building where three members of staff in particular, expressed a strong interest in recreational photography. They were Annette Raffan, Mike McGibbon, and myself. We started with monthly evening sessions open to anyone to show photos based on two themes we collectively decided on. For example,  the themes for the November meeting in 2013 were “Shadows” and “Gravity”. These meetings were attended, as they are now, by between 4 and about 12 people, with typically 6 or 7. After about a year we ran out of back catalogue photos to show for any themes so we quickly changed to something really simple, basically anyone showing “any good photos you took last month” (or anything they like actually).

For one meeting per year we don’t have the normal photoclub but instead do a spring trip, which could be on campus, photographing the Cathedral graveyard or the Botanic Gardens. We have three times now travelled for our spring trip, twice to the Muir of Dinnet Nature Reserve, and once to the wonderful gardens of former Head of Botany, Professor Ian Alexander.

Everyone is welcome to get involved, either at the meetings (to show photos or just to watch) or to submit photos for Photo of the Month. Actually, you don’t need to be in SBS since several of the regulars are not. And you do not need a fancy camera. Since this group has been going we have witnessed the transformation of mobile phone cameras. I think the first mobile photo we got was from an iPhone 5 in 2014 taken by Hazel Davidson. Now half the photos we see are from mobiles.

The final point to make is that one Photoclub regular is Mark Paterson, Curator of the Cruickshank Botanic Garden. If he does not come, we miss him partly because we miss his irrepressible good humour, and partly because we get him to identify the plants in the photos shown. But he has an ulterior motive for coming. He wants our photos- he wants your photos- for his Botanic Garden Calendar which he puts together annually. Since photos of the garden feature heavily in most Photoclub events, he gets to pick contenders for next year’s calendar.

So, to all photographers out there- join our club. Look out for emails to SBS staff and postgrad research students or email me, Adam Price on a.price@abdn.ac.uk.