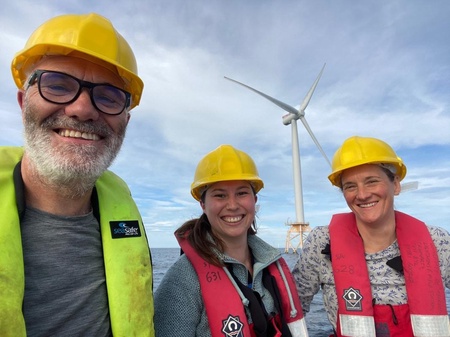 Genevieve is engaging with two main fieldwork projects: the long-term study into breeding fulmars on the uninhabited island of Eynhallow in Orkney, and the passive acoustic monitoring work in and around offshore wind farm sites in the North Sea. She joined Paul Thompson and Ana Payo-Payo on Eynhallow in June along with visual artists Neville and Joan Gabie, who will also be creating film and drawings about the project for a commission at the Hull Maritime Museum.

‘I’m excited to see what happens when poetry and science come together,’ says Genevieve. ‘We use language in very different ways, but we’re both in the business of exploring and experimenting, finding new ways to understand animals and our environment, and discovering something new.’

Genevieve has previously collaborated with music, having nationally toured two critically acclaimed gig-theatre shows with her multi-instrumental band the Unsung. ‘For me poetry is all about sound and rhythm, and this project gives me a whole new way of approaching the musicality of the sea – through the underwater sound traps and click detectors deployed by the team, which measure activity from animals such as dolphins, porpoises and minke whale.’

‘I’ve always loved marine mammals, and when I was about ten years old I had an adopted Moray Firth dolphin with WDCS. My forthcoming pamphlet, Landsick, explores my relationship with the sea and some of the creatures that live in it, so it seemed like a natural step for me to work closely with marine biology.’

Genevieve’s poems have been widely published in anthologies and magazines, and she’s performed at events and venues including the Edinburgh Fringe, London’s Roundhouse, and Banff Mountain book and film festival in Canada. She is the author of A Beautiful Way to be Crazy (Verve Poetry Press, 2020), and her pamphlet Landsick is forthcoming from Broken Sleep Books in 2023.

The Lighthouse team are now seeking funding to build on Genevieve’s residency, with the potential to involve a sound designer and videographer, put on collaborative arts-science events in Cromarty and Aberdeen, and develop outreach work with local schools.

View a video from the Eynhallow Residencies here.