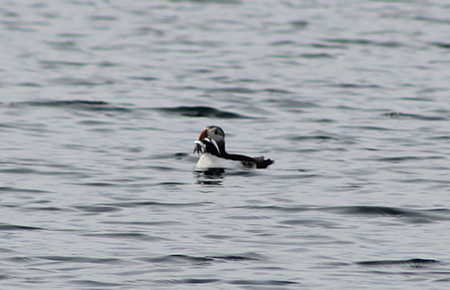 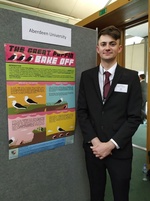 Craigleith is an uninhabited island and important puffin colony in the Firth of Forth. The island first gained national attention thanks to a Channel 4 documentary highlighting the plight of the puffins due to the invasive plant Tree Mallow. Indeed, it is estimated that the population declined two-thirds from its 1999 record of 28,000 breeding pairs.

Tree mallow seeds probably arrived on the island after being ingested by scavenging seabirds or attached to feathers, although we’ll never know for sure. The plant can grow rapidly (up to 3 metres tall), has a woody stem (which offers protection from grazing rabbits), and can produce thousands of seeds each year. It’s no surprise then that before long the entire island was covered in tree mallow. For the puffins, this was a disaster. Puffins return to their burrows each year, but the wild growth of the tree mallow often concealed or blocked entrances, potentially delaying or preventing breeding. Upon first seeing Craigleith, Professor Rene van der Wal exclaimed that the island “looked like a temperate rain forest”.
Fifteen years on from that fateful day and the situation was much different. Thanks to the work of local volunteers, the tree mallow had been cut back to just a few troublesome plants, although research indicates there are still almost 500 seeds per metre of soil! This means the cutting must continue or else the tree mallow will simply regrow to cover the island again. Vegetation surveys indicated that natives such as Yorkshire Fog and Red Fescue had finally been able to re-establish. However, the puffin population showed no signs of growth.

It’s here that I joined Rene as his latest Honours student ready to investigate the possibility that great black-backed gulls (a known predator of puffins) were responsible for preventing their recovery.
Under normal circumstances, a population can easily withstand a small predation pressure. However, when a population has been reduced significantly it becomes vulnerable to smaller pressures. Thus, we know GBBs aren’t responsible for the puffin population plunge, but it could be possible that they are keeping them in limbo.

In what seems like a different world, I travelled all the way down to Craigleith with my trusty metre stick and spotting scope to see what I could find out. I was to camp on this tiny uninhabited island, as many seabirds are most active at sunrise and sunset. It was a surreal experience; it was dark for maybe 2 hours, and not once did the seabird cacophony relent. At multiple times during the night herring gull chicks snuck underneath the outer tarpaulin of my tent to come squawk in my face. Having slept for maybe 30 minutes total, I left the tent at 3am to begin my observations, and to my surprise the entire island was shrouded in a thick fog, with barely 20 feet visible in front of me. I couldn’t see a single bird, and yet I could feel the displaced air from their wings as they flew just a couple of feet above me. Without a doubt, that experience will stick with me for life.

After three days on the island, I had everything I needed – and so began 3 months of reading, discussions, statistics, more reading, and finally writing. In hindsight, the experience was incredibly enjoyable – although at the time it certainly felt like hard work!
The results were in, and it seemed as though GBBs were off the hook. The evidence suggested that current predation levels are simply not enough to be the main cause of the stagnation. It is likely that most GBBs only killed a couple of puffins per year. However, one GBB pair was found to have stockpiled 30 puffin carcasses in a gruesome display – a behaviour never before recorded on Craigleith. This pair are puffin specialists, and while they do not present a danger to the population themselves, if more specialists arise on the island then the situation may change. Volunteers visiting the island in future years must keep their eyes peeled for signs of these specialists.

Despite what I thought were mediocre results, the project was selected to be presented at Parliament as part of an event hosted by the British Conference of Undergraduate Research in London, as well as the Scottish Ecology, Environment, and Conservation Conference at the University of Glasgow. I was overwhelmed by the positive responses I received to my work, and decided I wanted to stick around for my master’s as a result.