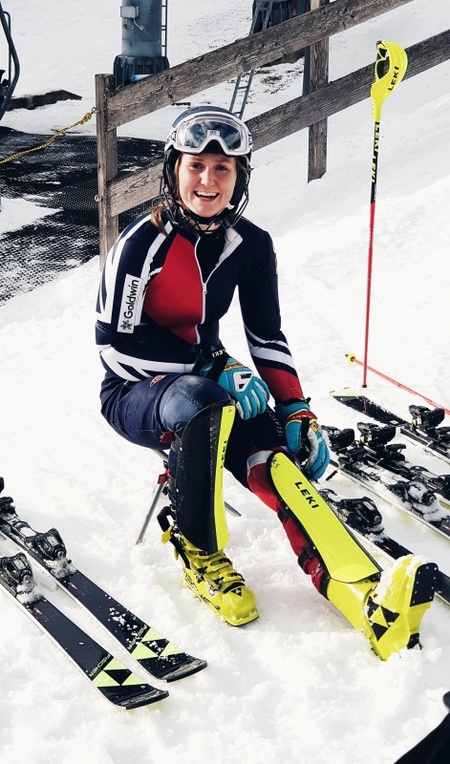 I started “skiing” at the age of 3 by being pushed down a hill on the golf course in Nethy Bridge near Aviemore, where my grandparents lived by my Dad. Once I passed the test of being able to carry my skis all by myself, my parents deemed me to be capable to adventure round Cairngorm Mountain and on being able to ride the T-Bar without falling off, I joined the race training group there. Everything started from that point, and until I was around 11, all of my skiing and training happened at Cairngorm, a heritage that I am immensely proud of.

My journey in ski racing has been one that has been full of challenges. In 2014, I crashed during training in Sweden, and ended up landing on a rock in the forest off the side of the slope. I broke 4 lumbar vertebrae. Although the bones healed well and very quickly, the lasting muscle damage and resulting movement difficulties were significant. My back health has been something that I have had to learn to build my training around and has taken me out of training months at a time over the last six years.

I live by the motto that “strong people are built with challenges” and I firmly believe that the injury struggles I have been through have built me into the athlete and person that I am today. In 2018, six months after competing at my first Olympic Games, I was going through an extremely low point in both body and mind and I made the decision to stop competing. *Spoiler Alert*, my retirement stint did not last long, but it took me to totally reevaluate my career, priorities, and self in general to build myself and body back up to the level I needed to be to race and train both pain-free and successfully. This was where I decided to apply for University and it really has been life changing. Since the beginning the process of heading back into education after a whole 7 years since finishing school, my results have gone from strength to strength and I am now (Nov 2020) ranked within the top 20 in the world.

Choosing what to study at University was a difficult choice for me but became obvious as 2018 into 2019 unfolded. My injuries have really played a huge part in my life and I originally had my heart set on being a physiotherapist. However, during my last rehab stint I began to understand the delicate balance that exists between the body and mind. They are both so neatly intertwined that rarely can one heal without the other. So, I went through clearing, promptly switched up my degree from Physiotherapy at RGU to Psychology at Aberdeen and kept competing. Being an athlete unable to compete and train was a horrendous place for me to be, even more so when I felt that very few people understood exactly what I was going through. I am pretty certain that I will use my experience and degree to remain in sport after I retire and even more so, to work with injured athletes and those with life-disrupting issues; who knows, I may even still head back to physio. Right at this moment though, I am just enjoying learning again, and will see where everything takes me!

I chose the University of Aberdeen as it was where I had initially had a University place straight out of school in 2012. My mum actually studied here too back in the 80’s and I have to say that the friendliness that I was constantly met with throughout the whole School of Psychology and Admissions Office made it an easy choice for me, not to mention the facilities to train at ASV and the proximity to my favorite place in Scotland – The Cairngorms.

Balancing studying with keeping on a full-time athletic career has certainly made me a very busy individual, but somewhat, far more efficient. I really have had to be far more organised and learn to prioritize to keep my life afloat. The renewed confidence that I have in myself as a student-athlete has been one of the biggest changes that I have noticed. We have recently been covering self-identity in personality and social psychology, and I think this shift in my life has been invaluable to my all round wellbeing as I have a focus and interest that lies outside of simply trying to get down a hill fast! Almost everything that I am reading and learning through the psychology course helps me prepare for competitions and has definitely helped me become a better communicator and leader within my team. Plus, a bad day training on the mountain can quickly be forgotten when deadlines and lecture commitments need to be fulfilled.

I started writing this blog on a plane up to Levi, Finland in the Arctic circle for the first World Cup races of my season that were on Saturday and Sunday the 21st and 22nd of November. They doubled as Olympic qualifiers for the 2022 winter games in Beijing. I am now finishing writing this on a plane back to the UK, and I am pleased to say that the races in Finland went to plan, and my Olympic qualifying results have been met. I need to thank everyone for their massive support over the last year and half and look forward to representing Aberdeen across the world for the next few years.

Thank you so much for reading, stay healthy out there and have a great Winter break.