Professor Gordon Noble has undertaken award-winning landscape research and field projects working on projects from the Mesolithic to Medieval periods. He was director and co-founder of Strathearn & Royal Forteviot (SERF), a successful archaeological project researching a site that became one of Scotland’s early royal centres. He now works on two major projects. The first, Northern Picts, is funded by the University of Aberdeen Development Trust and Historic Environment Scotland and is focused on the post-Roman societies of northern Britain. The second, Comparative Kingship, funded by the Leverhulme Trust, is examining the early royal landscapes of Ireland and Scotland. Research for the Northern Picts and Comparitive Kingship projects won Research Project of the Year 2021 in the Current Archaeology Awards, the leading UK archaeology awards programme.

Public engagement is a big part of his research and to date five major exhibitions of the work of Northern Picts has been on display at the Tarbat Discovery Centre and King's Museum, Aberdeen and as part of exhibitions at the National Museum Scotland. Northern Picts research has also featured on BBC 2 'Digging for Britain', National Geographic, Radio 4 'In Our Time' and many other media venues.

Since completing his PhD in 2004, Gordon has held a temporary lectureship in Durham (2004-5) and from 2005-8 undertook British Academy funded postdoctoral research on the perception of the forested environment in prehistory at the University of Glasgow. Gordon was appointed as lecturer to the department at Aberdeen in July 2008. In 2012 he became Senior Lecturer, Head of Department in 2015, Reader in 2017 and Professor in 2019. He is also a Honorary Curatorial Fellow to the University Museums.

A short interview with Prof G!

I am currently accepting PhDs in Archaeology. 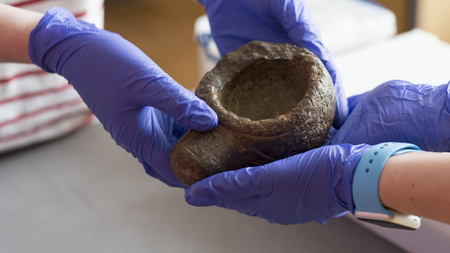 The nature of the societies and social, ideological and political frameworks that filled the chasm left by the demise of the Roman Empire in the 5th  century AD – both within and beyond the Empire’s boundaries – is one of the most contentious debates about  late- and post- Roman Europe. This project adopts an innovative interdisciplinary focus that tackles  the formation of the socio-political landscapes  of Northern Britain and Ireland,  utilizing archaeological, historical, toponymic and  palaeoenvironmental methodologies along with Bayesian-modelled chronologies,  to create a new  synthesis of the  dramatic changes that  ultimately led to the formation of the state societies that existed beyond the edges of the Roman Empire.

Northern Picts is a project that aims to uncover the archaeological traces of Pictish society in northern Scotland. The project to date has had some spectacular successes. We have begun to uncover a major and undocumented Pictish royal centre at Rhynie and discovered a significant portion of a major Pictish silver hoard at Gaulcross. We have scaled sea cliffs to discover forgotten Pictish forts and centres of power. Find out more here.

North-east Scotland contains landscapes of world-leading importance for history, archaeology and community heritage. This project focuses on building heritage-based partnerships and involves an interdisciplinary community-centred research project concentrating on the past, present and future significance of one of north-east Scotland's most celebrated cultural and physical landmarks: the hill of Bennachie and its environs.

Woodland in the Neolithic of Northern Europe: The Forest as Ancestor.

A book length study of the social role of trees and woodlands in prehistory with case studies from Britain and Ireland and South Scandinavia. Incorporating environmental, anthropological and archaeological approaches, this study aims to formulate new approaches to the study of past landscapes. The final book is published by Cambridge University Press.

My current supervision areas are: Archaeology.

In the course of my career Professor Noble has led on successful research grants totalling over £2.5 million, £2.25 of which has been raised while at Aberdeen (2008-21).

Additional teaching on a range of other modules including Archaeology of the North, Advanced Archaeological Practice, Archaeologies of Social Life and Landscape Archaeology