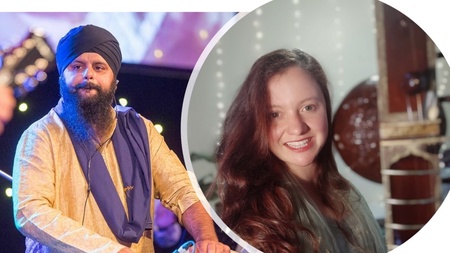 The Department of Music is delighted to welcome both Rhiannon, a Sitar player, and Hardeep, a Tabla player, to the Concert Series.

The Department of Music has for a long time, recognised the collaborations of musicians from across the globe and are very pleased to have Sitar and Tabla players performing as part of the main concert series.

Rhiannon is a sitarist from the Maihar Gharana. She is a performer, composer, arranger, sitar instructor, and music transcriptionist. Rhiannon recently toured as a guest composer and performer with Pop-Up Magazine, a live literary and multi-media production. She has performed at venues such as the Paramount Theatre in Oakland, BAM Howard Gilman Opera House in Brooklyn, and the Lincoln Theatre in Washington, DC. In 2019/2020, Rhiannon was the artist-in-residence with the Gandhi Ashram School Orchestra in Kalimpong, West Bengal. She taught traditional aspects of raag and taal, as well as excerpts from her original orchestral compositions, which are based on a melding of North Indian Classical and Western Classical Music.

Hardeep is an accomplished Scottish based musician, composer, sound and performance artist whose practice is an interdisciplinary one that crosses over into performance, teaching and sound design. His work has taken him on numerous tours around the USA, Canada, India and Europe. Hardeep's recordings are distributed and published worldwide, and he has written music/soundscapes for German based band 'Homebound' and 'Reveal'. Hardeep is a classically trained tabla player, vocalist, improviser and composer.