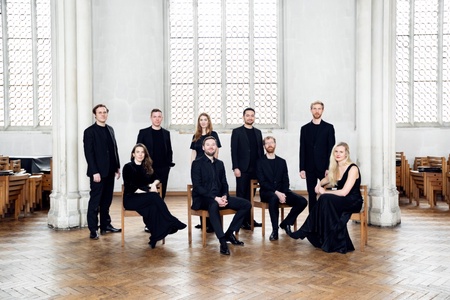 Department of Music present the renowned vocal group, The Marian Consort, to the Concert Series

The Marian Consort is a vocal ensemble that presents bold and thrilling performances across the UK, Europe and North America. Led by founder and director, Rory McCleery, the group is composed of the very best singers in a flexible, intimate ensemble, allowing clarity of texture and subtlety of interpretation that illuminates the music for performer and audience alike. TMC features regularly on BBC Radio 3, and has released eleven recordings to critical acclaim, praised for ‘precision and pellucid textures’ (The Times).

The Marian Consort performs music from the fifteenth century to the present day, with a focus on bringing to light and championing lesser-known works by composers such as Vicente Lusitano, Raffaella Aleotti, and Jean Maillard. New music is of vital importance to TMC, and in recent years it has commissioned Dani Howard, Cheryl Frances-Hoad, Gabriel Jackson, Donna McKevitt, and Ben Rowarth. TMC regularly collaborates with ensembles, including the Carducci Quartet, Berkeley Ensemble, and Illryia Consort.

This concert will see the premiere of Phillip Cooke's Canticum Mariae Virginis which was specially written for the Marian Consort. This piece juxtaposes two texts, both regarding the Virgin Mary, but offering different yet complementary accounts of the Blessed Virgin. As well as pairing these texts, the piece also uses two different languages and two points of view in its six-minute duration. The piece blends the formal Latin of Cantemus in omni die, the earliest known Latin hymn to Mary originally composed in the Western Christian Church (written on Iona in the eighth century) with excerpts of the Magnificat in archaic Scots, taken from the sixteenth-century anthology the Bannatyne Manuscript.

Dr Phillip Cooke is Senior Lecturer in Composition at the University of Aberdeen. His works have been performed and broadcast around the globe. His music is inspired by his native Lake District, by history and by ongoing traditions.