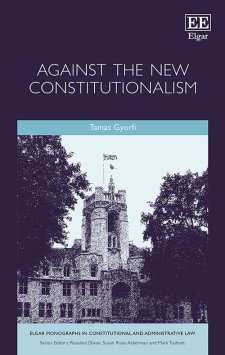 The justifiability of constitutional judicial review is one of the perplexing questions of constitutional theory. Every generation of constitutional lawyers has struggled with the issue without being able to provide knock-down arguments that would have settled the controversy. In the UK, the adversaries of the two positions are (for better or worse) called political and legal constitutionalists, respectively. Since almost all public law textbooks cover this controversy, the debate is familiar to every undergraduate law student in the country. All this suggests that there is hardly a more hopeless enterprise in constitutional theory than to make a new contribution to this debate. Nonetheless, in my new book, titled Against the New Constitutionalism, I endeavoured to tackle exactly this issue.

The debate about constitutional review has both an academic and a more popular version and there is a huge discrepancy between the fortunes of the two rival positions at these two levels. The discourse seems to lose its momentum at both levels, albeit for very different reasons. In the academic discourse, many people feel that everything that can be said on the issue has been already said. The debate seems to have reached an impasse, where people with different intuitions reach different conclusions. By contrast, in the more popular version of the controversy, legal constitutionalism has almost conclusively defeated its opponent. As a result of this, virtually every democracy has introduced some type of constitutional review.  As Alec Stone Sweet correctly registers, “As an overarching political ideology, or theory of the state, the new constitutionalism faces no serious rival today” (Stone Sweet 2000, 37). I will address the academic and the popular versions of the discourse in turn.

Thesis One: we can still make progress in the debate

Since the topic has generated a voluminous literature, it is not implausible to argue that the prospects of progress in the debate are rather dim. So can we expect any new insights from further debates?

Those who are sceptical about the possibility of progress in the debate must hold either that (1) such institutional considerations are irrelevant or that (2) new research cannot result in significant progress in the study of institutional capacities. However, it seems to me that the first claim is simply wrong and the second one is unsubstantiated. Contrary to the second thesis, I believe that Adrian Vermeule is right to claim that our understanding of institutions’ capacities is still rather rudimentary (Vermeule 2003, 3).

Above I made the rather cautious and safe claim that when we tackle the justifiability of judicial review, institutional analysis matters. Now I want to make a much stronger and much more controversial claim.

In a slightly exaggerated and provocative form the claim says that doctrinal legal scholarship is irrelevant for the purposes of the debate.

The role of institutional analysis is to say something about which institutions will produce the best outcomes under certain circumstances. Human rights lawyers engage in a rich discourse about what constitutes the best outcome in rights-related issues. Should assisted suicide ever be made legal? Under what conditions is affirmative action justified? Should an employer accommodate its employees if they want to wear religious symbols?

I have a huge respect for those scholars who engage with these types of questions. I myself have strongly held views on many of these issues and consider myself a participant in this discourse. However, the problem is that in most complex constitutional issues, like the ones mentioned above, competent constitutional lawyers will disagree. In a pluralistic society, in such cases, we are unable to provide conclusive arguments as to what constitutes the correct outcome. Institutional analysis should, therefore, be limited to general epistemic, motivational and procedural considerations. Is the diversity of a decision-making body more important than the ability of individual decision-makers? To what extent is the decision-making of our institutions distorted by self-interest? Which procedure is the most conducive to producing good outcomes? For instance, what is the right balance between transparency and secrecy in a decision-making environment? These questions are very different from the ones that I mentioned above and are not doctrinal in their nature. Constitutional lawyers whose primary expertise is related to doctrinal issues are, therefore, not the best qualified to answer such general institutional questions.

Thesis Three: the debate must be contextual

However, it might be the case that: (1) although the set of relevant arguments is the same everywhere, their strength will differ from jurisdiction to jurisdiction; and (2) the relevant arguments pull in different directions. In that case, one might conclude that constitutional review is justified in certain countries but is unjustified in other ones. I argue in my book that both of the aforementioned conditions are met. Both of the adversaries in the debate have strong arguments, and the strength of at least some of these arguments is not constant but depends on the particular features of the political system in question. One could argue, for instance, that the political process has malfunctions everywhere in the world, but these malfunctions are clearly not equally severe in each political system. If there are strong arguments on both sides, it does matter how severe these malfunctions are and this factor might be decisive in the overall balance of arguments.

The debate about judicial review usually pitches the legislative body or the elected branches in general against courts or a specialised constitutional court. In that binary framework, an argument against one of the institutions is automatically treated as an argument for the other. This binary framework fits well with many argumentative strategies that are used routinely in the controversy. If, for instance, the lack of political accountability is a conclusive argument, the issue is settled: in that case, constitutional review cannot be justified. Similarly, if the protection of human rights is understood as a technical legal issue, the superiority of courts will be beyond doubt and the justifiability of constitutional review is difficult to challenge.

When we form an overall judgement about the justifiability of judicial review, we have to consider both process-related and outcome-related reasons. Some of the latter can be classified as epistemic, others as motivational arguments. In my book, I argue that we do not have strong epistemic arguments to justify judicial review. The strongest argument of legal constitutionalism is motivational rather than epistemic. Even the most ardent opponents of judicial review would have to admit that the political process has many blind spots. Let us suppose that this motivational argument outweighs all the objections made by political constitutionalists. In the binary framework, this would imply that judicial review should be considered justified. However, once we give up the binary framework, it becomes clear that the arguments against the normal political process do not automatically support judicial review.

The argument that relies on the malfunctions of the political process suggests that the main asset of the judiciary in the interpretation of human rights is its independence. But independence is not unique to the judiciary. I also argue in my book that legislatures are superior institutions to courts in epistemic terms so far as the specification of human rights are concerned. What gives them an edge in this comparison, is their greater cognitive diversity. I do not expect the readers of this post to accept my empirical claim about legislative bodies. However, they might accept that (1) cognitive diversity is a crucially important epistemic asset; (2) courts are very far from the ideal of an epistemically diverse institution; (3) independence is not unique to the judiciary. If these conditions are met, it is at least conceivable that a third institution combines independence and cognitive diversity better than a constitutional court.

Thesis Five: the debate can shape the future of weak judicial review

The above four theses have focused on the academic debate. However, since in most jurisdictions the power of specifying the meaning of abstract human rights has already been conferred on courts, one could ask whether the debate matters any more. Let me offer two reasons to support my affirmative answer.

In the Nordic countries, courts tended to exercise their power with extreme self-restraint. Judges disapplied a legal provision only if it was manifestly in conflict with the constitution. This requirement of manifest conflict has been recently removed from the Swedish constitution and is also under attack in Finland. More importantly, the supervisory role of the Strasbourg court is inconsistent with the internal logic of both the New Commonwealth model and the deferential judicial review of the Nordic countries. The upshot is that political constitutionalism still has some strongholds in mature democracies but the judicial review of these countries is at a crossroads. Political constitutionalism can and must make an intellectual case for preserving the distinctive constitutional traditions of these mature, first-wave democracies.

Thesis Six: the debate is relevant for the secondary allocation of decision-making authority

It is an undisputed fact that in most countries the authority to specify the meaning of human rights provisions has been conferred on courts. However, we should keep in mind that the establishment of judicial review does not determine once and for all how courts can and will exercise their powers. Let me call the initial decision whether to establish judicial review the primary allocation of decision-making authority, and the fine-tuning of how this power should be exercised the secondary allocation of decision-making authority.

For instance, the Human Rights Act 1998 has fundamentally changed the British constitutional landscape by moving away from the traditional understanding of parliamentary supremacy. However, the Act requires fine-tuning. The question about the proper grounds and extent of judicial deference is one of the central issues of British public law today. The Act defines what the Parliament may do when a court issues a declaration of incompatibility. However, it leaves open what the legislature should do if that happens. Although the secondary allocation of decision-making authority is less dramatic than the primary one, it raises, nevertheless, many important questions. Therefore, we need a theory that guides the secondary allocation of decision-making authority and this theory will naturally draw on the arguments about the justifiability of judicial review.

My book is a plea for both institutional conservativism, and institutional experimentalism. On the one hand, the fifth thesis of the foregoing analysis suggests we should regret if the distinctive constitutional traditions of mature, first wave democracies are lost. I am not against significant reforms or giving human rights a more prominent place in those legal systems. However, moulding them into the uniform template that legal constitutionalism offers is something that we should regret.

On the other hand, my book is also a plea for institutional innovation and radicalism. Even if legal constitutionalists are right to claim that the normal political process has inherent blind spots and malfunctions, if cognitive diversity is as important as I think it is, I find it hard to believe that we strike the best balance between the relevant motivational and epistemic considerations by conferring the authority to specify abstract human rights on a fairly homogeneous judiciary.

“I have read Dr Gyorfi’s excellent book which as its name suggests is a full on attack on the supremacy of judges advocated by the New Constitutionalism. The attack is primarily theoretical but it is supported by empirical evidence. It is a brilliant vindication of why mature democratic societies should leave the last word on difficult, contested issues to legislatures rather than courts. I wholeheartedly recommend this book to anyone with an interest in how sophisticated democracies should structure their governance.”

“Gyorfi’s book has the rare virtue of combining a refreshing theoretical intervention to the old – but ongoing – debate about the legitimacy of judicial review of legislation with a critical examination of different institutional attempts to balance democracy and human rights. It is a must-read for both constitutional theorists and comparative constitutional lawyers.”