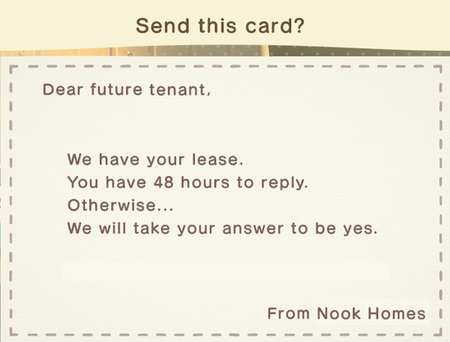 On 15 April, Scott Styles wrote here on Covid-19 and the Frustration of Leases on the Grounds of Illegality.  In this short note, Mitch Skilling and Douglas Bain consider – in much briefer form and citing far fewer authorities than Mr Styles’ scholarly discussion - another aspect of contract and leases that has been drawn to their attention.

Whilst fanciful and a little over-dramatic, the above image (a product of Mr Skilling playing a little too          much Animal Crossing over the summer) broadly summarises the subject of this post.

We recently received an e-mail from a student querying a statement made by a letting agency in relation to a proposed Private Residential Tenancy for the coming academic year.  The statement being queried was:

Once we have satisfactory references, confirmation from your guarantors and your deposit has been paid we would then then draw up the formal lease agreement.  The documentation would be emailed to yourselves and to your guarantors.  Under Scottish Law, after 48 hours of the lease documents being emailed, it is deemed the terms of the lease have been accepted however you can contact us within that 48 hour period to advise us you do not wish to proceed.  I presume however that you are serious about your application and your intention is to proceed (providing you have no genuine concerns about the lease terms) but should this is (sic) not the case and you have doubts I would prefer you advise me now as it is both time consuming for us and costly for the landlord to get to that point.

The last few words in the quoted text are unequivocally accepted by us as conveying an understandable position on the part of the agency.  It is the underlined text (our emphasis) that is of particular interest to us, but in the interests of fullness we will start at the beginning.

‘… your deposit has been paid’

A tenancy deposit is, as per s.120(1) of the Housing (Scotland) Act 2006 a sum of money held as security for the performance of any occupant’s obligations arising under or in connection with a tenancy or an occupancy arrangement, or the discharge of any of the occupant’s liabilities which so arise.  Per reg.3(1) of the Tenancy Deposit Schemes (Scotland) Regulations 2011, a landlord who has received a tenancy deposit in connection with a relevant tenancy must, within 30 working days of the beginning of the tenancy, pay the deposit to the scheme administrator of an approved tenancy deposit scheme, and provide the tenant with certain information in respect of the deposit, the scheme and the tenancy as required by statute.

A Private Residential Tenancy (PRT) under the Private Housing (Tenancies) (Scotland) Act 2016 (‘the 2016 Act’) is constituted when the requirements of Part 1 of the Act, including that the tenant has taken up occupation of the subjects.  A PRT may come into existence without a written contract (or tenancy agreement, or lease, whichever form is used), but cannot without the commencement of occupation (or entry, or possession, whichever form is used).

In the paragraph quoted above, it is expressly stated that the drafting of the lease follows the payment of the deposit, therefore, in strict terms, it cannot be a ‘deposit’, so what might it be?  Could it be categorised as a charge, albeit refundable, in connection with the grant of a tenancy?  But that would be a premium, meaning ‘any fine, sum or pecuniary consideration, other than the rent, and includes any service or administration fee or charge as a condition of the grant, renewal or continuance of a protected tenancy, per ss. 82(1) and 90(1) of the Rent (Scotland) Act 1984.  And the levying of premiums is a statutory offence.

On that point, we note here with interest the recent decision of the First-tier Tribunal in Rai v Lets Direct (Southside) Ltd, where a prospective tenant who paid a ‘deposit’ during negotiations but ultimately elected not to proceed with the tenancy was able to recover the amount, with the Tribunal noting that it was arguable that the letting agent’s actions would constitute an offence under the 1984 Act.

‘… draw up the formal lease agreement’

As already noted, a PRT under the 2016 can come into existence notwithstanding the lack of writing, per s.3 of the 2020 Act –

(1) A purported contract becomes lawfully constituted, despite not being constituted in a written document as required by section 1(2) of the Requirements of Writing (Scotland) Act 1995, when—

(a) a person occupies a property as the person’s only or principal home in pursuance of the purported contract’s terms, and

(b) the tenancy which the purported contract would create, were it lawfully constituted, would satisfy the conditions in paragraphs (a) and (c) of section 1(1).

(2) Any term of a purported contract which is unrelated to a private residential tenancy is not to be regarded as a term of the contract for the purpose of subsection (1).

This is because the 2016 Act largely dictates the terms of the tenancy agreement itself, in the form of the ‘Statutory terms of tenancy’ spelt out in ss.7-9 and Schedule 2 of the Act.  Other provisions in the Act further augment the ‘terms incorporated by statute’ nature of the PRT ‘lease’ (if it is even proper to still use that term to something which we have previously argued can exist absent core elements of the classic Scots law lease – see our earlier post here and our discussion of the ‘ishless tack’).

That is not to say that a PRT could not be lawfully constituted by writing in advance of the tenant moving in, merely that it could be constituted without it (i.e. writing). However, the order presented in this scenario of ‘deposit first, then tenancy agreement’ remains backward in terms of making the ‘deposit’ an actual tenancy deposit.

We then come to the matter of whether or not such a written tenancy agreement envisaged by the agency could be lawfully constituted if the proposed tenant failed to contact the agency in the 48 hours following receipt of the ‘formal lease agreement’.

It is trite law that a contract is concluded upon the unqualified acceptance of an unconditional offer (or unconditional acceptance of an unqualified offer – the order hardly matters).  Acceptance will not be implied from inaction or failure to respond or silence on the part of the offeree (see Stair Memorial Encyclopaedia, Obligations para 639, or MacBryde, The Law of Contract In Scotland (3rd edn) para 6-71, which states that only under ‘exceptional circumstances’ may silence amount to acceptance).

A PRT might come into existence if a doubt-filled prospective lessee was, after a weekend of swithering, to conclude on Monday that she or he was now handcuffed to a prior-Friday sent lease, and then took up occupation.  Thereafter, wanting released, the tenant might look at law in relation to misrepresentation - fraudulent, negligent or innocent – so as to allow for the annulment of the obligation and perhaps a claim in damages.  However, Part 5 of the 2006 Act specifies that ‘a tenancy which is a private residential tenancy may not be brought to an end by the landlord, the tenant, nor by any agreement between them, except in accordance with this Part’, and s.48 then specifies the manner in which a tenant may bring a tenancy to an end – which allows us to return to an observation made by us in previous blog posts quoting the observation by the advocate Adrian Stalker during the Bill stages of the 2016 Act in respect of what ultimately became the Part 5 ‘termination only on the basis of the provisions in this statute’ approach in the 2016 Act that “[t]his seems to rule out various ways in which a tenancy may terminate at common law, say by renunciation, the parties entering into a new agreement, the operation of a break clause, total or partial destruction of the subjects, and so on”.  We continue to quote Stalker because his statement continues to have relevance.

Of course, the swithering lessee could always simply give the required notice in terms of s.49 of the 2016 Act, which would, in the circumstances, be 28 days, as anything other specified in the lease would be invalid under s.49(4) of the Act, having been entered into before the tenancy became a private residential tenancy.

As to where the agency plucked the 48 hour window from, we can only speculate. There are a handful of relevant 48 hour notice windows that could apply to tenancies but all of them would occur once the tenancy had commenced, including the required notice where a landlord requires access to the let property. That one may be a mystery we are unable to solve.

We have, separately, in recent months, seen landlords impliedly purporting to create new Short Assured Tenancies under the Housing (Scotland) Act 1988 (probably due to a failure to update pre-PRT standard template documentation), and wrestling with language in an attempt to preserve, in the Private Housing  (Tenancies) (Scotland) Act 2016 era, aspects of the Rent and Assured tenancies regimes (see here).

All this is incredibly messy, and illustrates two points. Firstly, there is a need for landlords and tenants to be better informed in relation to the law.  As we said at the beginning, the landlord’s motivations here are perfectly clear and reasonable, i.e. not to get stiffed by timewasters, but the translation of those motivations into written form might bring pitfalls.  Secondly, while legislators might set out to kill the Scots common law anent particular matters with the best of intentions in mind, getting a clean kill is another matter entirely, and the ghost might hang around to haunt the rest of us.