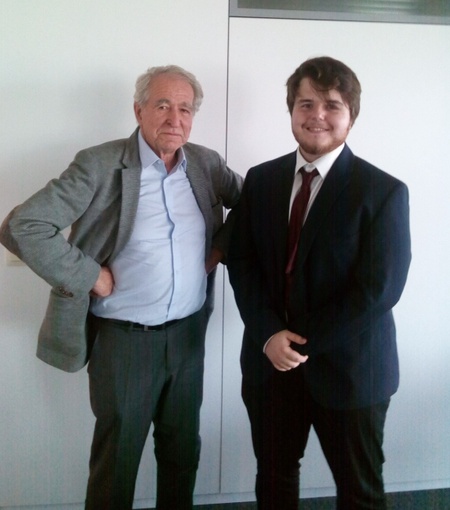 I am a University of Aberdeen student in my third year of the LLB with English Law programme and I have had the opportunity to attend the founding conference of the European Association of Lawyers and Practitioners in Public Law and the Law of Territorial Administration (AEAPDP) in Brussels thanks to the grant provided to me by the Law School. I have long been interested in public law even outside the remit of my studies and my experience from the conference is something I would like to share on this post.

I was invited to the conference during my internship in France, where I had met the president of the organisation, Maître Galliard, before his hearing with the judge. With my feeble and underdeveloped French, I attempted to converse and, somehow, I managed not to trip over my tongue and made a positive impression. After some more talking, the conversation led to the new association he was forming to campaign for something I have been interested in for a long time, namely the next step in European integration. I was excited to be invited to the founding conference, but I knew that with the funds of a poverty-stricken student, I would not be able to get to Brussels.

Maître Galliard suggested that I might try to get a grant from the school, but I was a bit sceptical about this possibility. How often do you get something from anyone for free? But turns out that I was beautifully wrong. After brief consultation with my personal tutor, I was referred along and then I only had to provide the details for the conference. Then, boom – trip funded.

Flight set up, hotel booked and the best chocolate shops researched, I embarked on my journey to Brussels. Brief stop in Schiphol and a ludicrously expensive train to the centre of Brussels later, I checked into my hotel with a beautiful view of a beautiful city. Good food and a night’s rest awaited me.

The conference was something I was particularly enthusiastic about. As an observer at the conference I took down notes for my future research and could truly focus on the content. Many subject matter experts from different countries of Europe were attending and even the representative from Macron’s government was there to express his support for the laudable goals of the organisation. Firstly, Professor Henri Oberdorff, the Associate Professor of Public Law at the Université Grenoble Alpes introduced the issues that the organisation will be facing going forward. Namely lack of accountability or a sophisticated code of conduct for elected local authorities, disharmony of public law within Europe, and problems with territorial cohesion. The best way to approach these problems would be further European integration, this time on an administrative level, as the uniting factor of European law cannot be overstated.

Afterwards, members from the different nations described the systems of public law in their own nations and the associated problems, with lawyers and practitioners of law from France, Belgium, Switzerland and Italy. Invitees and interested parties at the conference were asking questions to the members for further clarification or were questioning their approach to the issues to provide a counterview. At the end of the conference, Maître Galliard clarified the structure and philosophy of the organisation provided the ideals and goals of the organisation for the near future, lobbying for a change on a European level and recruitment of new members. While this may not seem directly relevant in the face of Brexit, the system of integration remains important and will probably be part of any deal the government makes. As Switzerland would confirm, the EU can have an impact even outside its borders.

I was truly inspired. Not only was the organisation acting out on the principles of political harmony and progress, its members do so without any financial gain for themselves. As Maître Galliard explained, no member will gain more clients or appear at more cases because of their efforts. Their intentions are purely altruistic for the advancement of law, for the benefit of the people, not themselves. I believe this is how change begins.

My point with this post is not only that I am a big nerd, but also that it is never too early to pursue your interests. If you are genuinely interested in a subject, you do not need to postpone it to your masters, dissertation or PhD. You have the ability to interact with the field that you are studying, affect real change and enrich your student experience from the beginning.

I am so thankful for the understanding and aid provided to me by the School of Law of the University of Aberdeen and for enabling me to attend a conference I otherwise would not have been able to enjoy.

Thank you for your attention.