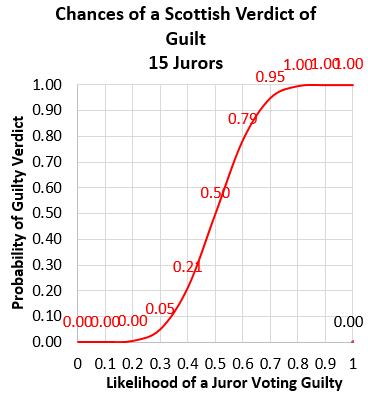 This article analyses the probabilities of success for criminal cases brought to civil court. It briefly examines potentially influential factors such as corroboration and criminal intent, and the implications of cases like Coxen and Goodwillie.

Recent work relating hung jury findings to Scotland’s not proven votes and verdicts has given rise to the hypothesis that drivers behind such outcomes are similar and that they both reflect what might be termed a zone of legitimate uncertainty when it comes to the polarization of opinion in the guilty/not guilty decision making process. It further posits that this is an important manifestation of fair process, not accidental, anachronistic or merely a glitch in the system but that such outcomes represent a jurisprudential acknowledgement of the potential for reasonable doubt, prejudice and peer pressure. Indeed this zone of legitimate uncertainty may also be described as the ‘region of reasonable doubt’ thereby offering, for the first time, a technical definition of what reasonable doubt means in effect. The criminal sanction is a heavy imposition particularly when it involves incarceration. This is reflected in the standard of proof required and the checks and balances of due criminal process; of which hung juries and not proven votes and verdicts currently form an important part.

A new Scots criminal law hypothesis is rendered as follows:

Zone of Uncertainty - The area under the bell curve has been described as a zone of legitimate uncertainty or, in legal terms, the region of reasonable doubt.

Not Proven Cases - A 50% Chance of Success in Civil Court?

The uncertainty manifested in hung juries and not proven votes and verdicts can be interpreted as much as uncertainty about guilt as uncertainty about innocence. The graphs shown indicate a balance in this respect and are rendered out of probability considerations. The peak of uncertainty occurs where there is equal likelihood, in a juror’s perception, of innocence or guilt. The standard of proof in civil court is greater than 50% - the balance of probability. All things being equal then, the not proven case in general should stand a 50/50 chance of success in civil court.

Why More Than 50% Chance of Success in Civil Court?

The width of the ‘zone of uncertainty’ represented in the graph here is based on the qualified majority system in jurisdictions where a hung jury is a possibility. This is an arguable extrapolation but, as noted, the zone is centred on 50% and this reflects an even distribution of likelihoods of juror perception of innocence or guilt. In fact in order for cases to come to trial the prosecution must generally believe in a good chance of conviction so there is every chance that in reality the distribution would be skewed in favour of a belief of guilt. This alone might lead to the conclusion that the not proven case (or hung jury case for that matter) would stand a better than 50% chance of success in a civil court. For reasons expressed in more detail elsewhere, the fact that civil court cases may be decided by an experienced legal professional as opposed to a public jury means that all the evidence can be heard and balanced in a consistent manner by someone with a knowledge of societal myths and prejudicial effects and this could well mean that the chances of achieving a successful outcome at civil proof can be more than 50%. In addition, Goodwillie demonstrated that cases which do not make it to a criminal prosecution at all can stand a chance of success in civil court.

The corroboration requirement can be a factor in such cases. Corroboration was finally abolished as a requirement in Scots civil law with the Civil Evidence (Scotland) Act 1988 as a result of The Scottish Law Commission’s 1986 report which noted;

‘It…may be inconsistent with justice that a party, though he may have an honest and credible case, must nevertheless necessarily fail if, through circumstances over which perhaps he has no control, corroboration is not available…The requirement of corroboration in civil proceedings in so far as it still applies should be abolished.’

Abolition of corroboration as a requirement in civil law was effectively brought about in stages, commencing first with the requirement in 1968 for it to be abolished in personal injury cases (solatium – Law Reform (Miscellaneous Provisions) (Scotland) Act 1968) where the chances of a corroborating witness being present could be low. As noted in my Master’s Thesis on Corroboration:

‘In the SLC’s 1986 report which led to the full abolition of corroboration, they described how there had not been ‘a flood of weak claims’in the wake of the 1968 legislation. The success of the earlier legislation which could, in retrospect, be described as incremental, first phase or even test legislation, thus allayed concerns and this in turn paved the way for the second stage, full abolition phase as defined by the 1988 Act. Such a graduated developmental strategy, be it by design or by destiny, minimised overall risk in evolving the application of corroboration from a common law legal rule to a discretionary tool for use in the evidential reasoning process for civil cases.’

In considering this incremental, risk containment and risk reduction process in relation to strategies used for bringing about controlled change in other fields of endeavour, I go on to make the broadly comparative note that:

‘...(T)he use of incremental innovation for the development of business and technology whilst minimizing overall risk is a well-established commercial and industrial strategy.’

Criminal law further requires that criminal intent is necessary for a crime to have been committed, this was historically expressed in Latin as 'actus reus non facit reum nisi mens sit rea.'

In the criminal law this ‘mens rea’ requirement manifests itself in the distinction between murder and culpable homicide and is arguably linked through legislation to an absence of reasonable belief of consent in rape cases. The extent to which these manifestations will be considered in civil cases will vary but clearly this is a differentiating factor worthy of further comparative study.

The subject matter of this article is currently an area of some public debate and difference of opinion. My intention in producing this piece is to bring forward a modicum of quantitative and comparative analysis for further consideration and to this effect I can think of no better conclusion than the words of my research supervisor, Professor Peter Duff, who responded to the first draft of this blog as follows:

‘I think you need to be more careful about the language in the final paragraph. There are not two systems of punishment: the civil courts are concerned entirely with compensation/damages. The law has set up – for good reasons – two almost entirely separate systems, which are self-contained and self-referential, each concerned with entirely different (in the law’s view) matters.’

[With reference to Richard Nobles and David Schiff on a systems view of miscarriages of justice and the criminal law.]