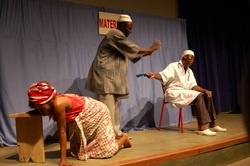 FEMHealth, a three year research project funded by the EC and led by Immpact at the University of Aberdeen, is now disseminating findings from its multi-disciplinary evaluations of national policies for free or subsidised obstetric care in Morocco and West Africa.

Amongst other questions addressed by the project were the factors behind the spread of these policies in the region, costs and effectiveness of obstetric exemption policies, their impact on quality of care, and also on the local health system. Visit the FEMHealth website for full reports and further information.  Findings on the local health system, and, in particular, on what explains whether and how policies are put into effect in local health systems were submitted as written evidence to the UK Parliamentary Committee on Health Systems Strengthening and can be found here. FEMHealth organised a dissemination conference in Ouagadougou in November 2013, which included a theatrical improvisation on the themes of financial access and also power imbalances in health facilities. Clips can be viewed in French and English here.

In addition to its research objectives, FEMHealth helped to launch an online community of practice focussed on financial access to health care in Africa which has more than 700 members, Anglophone and Francophone, continues to link policy-makers, scientists and practitioners in the region. See also the related blog-site.

FEMHealth was funded by the EU under FP7. It ran from January 2011 to March 2014. The research consortium consisted of eight partners operating across six countries: the University of Aberdeen (UK), the Institute of Tropical Medicine (Belgium), AFRICSanté (Burkina Faso), CERRHUD (Benin), Marikani (Mali), INAS (Morocco) and IRSS (Burkina Faso).

The objectives of the project were: