Brain compare: Scots and Indian scan study could give clues on Alzheimer's
09 August 2018 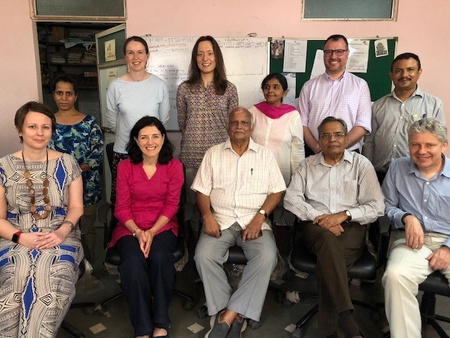 How the brain ages in people from different countries and cultural backgrounds is the focus of a new study by the University of Aberdeen.

Researchers will compare existing data from its renowned Aberdeen Children of the 1950s, who have been studied by the University since they were at school, with two similar groups in India.

As part of a £200,000 grant from the MRC to fund four pilot studies, Aberdeen researchers will carry out brain scans on members of two birth cohorts from Mysore in India.

The Indian scans will be compared to the Aberdeen cohort scans to compare and contrast how differences in culture, education, nutrition and other health variables can affect how the brain ages which could give clues as to what factors increase or decrease brain function and the risk of Alzheimer’s and other related illnesses.

The Indian government has identified the need to reduce mental illness and cognitive decline as major healthcare priorities and these are also objectives of the World Health Organisation.

The initial study will see the brains of around 100 members of the Indian cohorts scanned, with plans to use the results to apply for funding for a bigger study later.

As well as the differences in diet, education and lifestyle from the two different groups, the researchers are interested to see what effect, if any, being bilingual or trilingual can have with regards to brain ageing. Most of the Aberdeen cohort speak just one language fluently, while in India most people speak at least three languages.

The link with the cohort in Mysore will build on existing extensive cardiovascular and diabetes research carried out by Dr Kalayaran Kumaran and Dr GV Krishnaveni with Professor Caroline Fall at the University of Southampton.

Comparing two cohorts from two different continents will give us an excellent opportunity to see how the, sometimes quite radical, differences in lifestyle, nutrition, education and occupation among many other factors can affect 'cognitive reserve' which protects your brain against decline." Professor Alison Murray

In addition to the brain scans, the MRC grant will support a further three pilot studies including work with Professor Corri Black at the Aberdeen Centre for Health Data Science on data storage and linkage and a public awareness project to inform and seek feedback from the Indian cohort with regards to how their data will be stored and made available and proposed future studies. Another pilot, in conjunction with the University of East Anglia will explore the use of modern techniques to conduct cognition tests, such as smartphone and tablet-based games and testing of less invasive ways to collect biological information such as saliva samples and cheek scrapes.

Professor Alison Murray, Director of the University of Aberdeen Biomedical Imaging Centre, said: “This project has great potential to allow us to see how where you are born and live impacts on your brain health as you get older.

“Comparing two cohorts from two different continents will give us an excellent opportunity to see how the, sometimes quite radical, differences in lifestyle, nutrition, education and occupation among many other factors can affect ‘cognitive reserve’ which protects your brain against decline.

“It will be particularly interesting to see if the fact that those in the Indian cohort can speak at least three languages helps to keep their brain in good shape as they age.”

About the Aberdeen Children of the 1950s

A renowned University of Aberdeen study tracking the health and mental abilities of children over more than 50 years is to be extended to include a similar group in India.

The Aberdeen Children of the 1950s cohort are a group of children who were given up to three simple mental tests whilst at school in 1962 and have since 2000 been involved in a number of follow up studies as adults.

The study provided researchers with a rich body of data about a population of 15,000 people from their birth records, to the initial test and subsequent tests analysing lifestyle, health and socio-economic factors.