I am currently accepting PhDs in Geography and Environment. 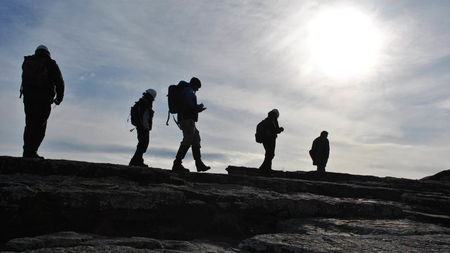 This work has evolved from a long established interest in surging glaciers, their dynamics, geomorphic signature and identification in the palaeo-landform record. A recent publication applied a Linear Elastic Fracture Mechanics (LEFM) analysis to crevassing on surging glaciers. This found that Mode 1 (open perpendicular to the principal tensile stress) extensional crevasses, which form a component of crevasse-squeeze ridge networks found in association with extant surging glaciers are most likely to have originated as full-depth bottom-up basal crevasses.

Analogue modelling of crevassing is currently in progress using a geotechnical beam centrifuge located in the University of Dundee. Self weight stresses and stress gradients, key to the formation and penetration of crevasses, can be replicated using a centrifuge and will allow current theories on glacier and ice sheet crevassing to be tested.

This project is funded by a NERC Small Grant.

To date work has focused on the Uummannaq region. Over four field seasons horizontal and vertical transects have been ground-truthed and sampled for terrestrial cosmogenic nuclide (TCN) exposure analyses in order to establish the Last Glacial Maximum (LGM) and subsequent retreat geometries and chronologies. A further component of this work is the investigation of the longterm landscape evolution utilising a suite of analytical and modelling techniques. Ultimately, it will focus on determining the complex feedbacks between landscape and ice dynamics as this landscape of selective linear erosion evolved.

Shorter term millennial scale dynamics are also under investigation at Kangiata Nunata Sermia. This calving ice margin has retreated ~20km from its Little Ice Age maximum limit. Quirks of drainage migration, a suite and glacial geomorphology and the presence of Viking settlements all provide the opportunity to constrain the advance and retreat history. These data are being used to constrain/tune a numerical flow-band glacier calving model and this work forms focus of James Lea’s PhD.

These projects have received funding from a number of sources including NERC, The Carnegie Trust and University contributions.

Currently this research has a number of foci. The reconstruction of palaeo-glaciers using geomorphological and chronological data to constrain numerical reconstructions has been a longstanding interest. From these reconstructions empirical relationships provide the opportunity to constrain quantitative estimates of palaeo-climate, specifically palaeo-precipitation. Work in this area is currently ongoing in SW Scotland in the Tweedsmuir Hills as the focus of Danni Pearce’s PhD.

A further development of this approach is looking at the reconstruction of small niche glaciers, in areas marginal for glacierization, where radiation shading and headwall avalanching play significant role in mass balance.

Multiple palaeo-glacier reconstructions provide the opportunity to develop regional-scale palaeo-climates which may elucidate the location and intensity of major atmospheric circulation components e.g. the Polar Frontal Jet Stream and track of mid-latitude depressions. Empirical data sets recording North Atlantic Ocean energy flux and glacier mass balance have been shown to be linked (Marie Porter’s PhD). It is hoped to develop this further to link palaeoceangraphic, palaeo-glacier and palaeo-atmospheric circulations for climate perturbations e.g. the Little Ice Age and Younger Dryas under the University funded “Fragility, Adaptation and Resilience to Climate Change in the North” programme under “The North” research theme.

This resarch area has expanded further recently into an investigation "Using glacier-climate proxies to model the Younger Dryas climate in Europe". This work is funded by a Leverhulme Trust Internatonal Network Grant. It aims to improve our understanding the coupled ocean-atmosphere-cryosphere-climate system in response North Atlantic Ocean forcing. The focus is on the North Atlantic freshening event which occurred during the Younger Dryas period, ~12.9-11.7 ka BP. This Network will investigate the timing and magnitude of the climate response to the ocean focing using palaeo-glacier derived climate proxy data. The International Network comprises glaciologists, geochronologists and climate modellers from seven European Institutions.