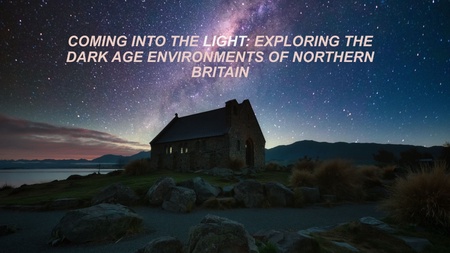 The early Medieval period has often been referred to as the 'Dark Ages', associated with economic and cultural decline after the fall of the Roman Empire between the 5th and 11th centuries AD. This is not true - An exciting new 5-year Leverhulme funded project led by Dr Samantha Jones & Dr Tim Mighall, entitled: 'Coming into the Light: Exploring the Dark Age environments of Northern Britain', aims to significantly challenge this narrative.

Despite being referred to as the ‘Dark Ages’ the 1st millennium AD was a period of profound change in northern Britain which saw not only the arrival and withdrawal of the Romans, but also the spread of Christianity, Viking raids, Norse settlement, the gradual consolidation of smaller native kingdoms and the formation of the kingdom of Alba. While similar issues in southern Britain have been the focus of much recent academic debate, the situation in northern Britain has received relatively little attention. Our understandings of the impact of Empire on these northern regions is thus severely limited. This is equally true for the period spanning the Late Roman period and the 5th century AD onward. It is well known that a rise in native forts north of the Roman frontier emerged. However, like the Roman Iron Age this period remains a dark age; we know very little about the native societies living in northern Britain at this time or the environmental changes that went hand in hand with increased unrest/changes in social structure, or the changes that Christianity brought.

The aim of this project is to understand ‘the important others’: the common lay and monastic communities – their economy, environmental impact and the resulting impact of social change relating to Roman incursions into NE Scotland, the spread of Christianity and changing political boundaries.

Methods: The project consists of an interdisciplinary team of scientists, archaeologists, and historians, from the Universities of Aberdeen, Glasgow, Santiago de Compostela, Queen’s University Belfast & National Museums Scotland. Several sites (see map) have been selected for investigation and include a combination of Roman forts located beyond the northern frontier where native farming communities lived, native settlement sites further away from Roman forts and early monastic sites. The sediments from the selected sites will be radiocarbon dated and analysed for fossil pollen, non-pollen microfossils, organic content, and geochemistry; and then the findings will be integrated with available historical and archaeological records.

Peat bogs and lakes contain the best sediments for organic preservation, but these tend to be located further away from archaeological sites and are therefore not useful for this type of investigation. To shed new light on changing social narratives of ordinary people and their impacts upon land-use and landscapes it is important to try these higher risk sites to get as close to the archaeological sites as possible.

Significance: The findings of our project will have educational, scientific, and cultural significance to a broad international audience ranging from the public to archaeologists, historians, and the scientific community. The area of investigation is beyond the most northern Roman frontier; thus, our research will help to generate international debate regarding Rome’s relationship with its neighbours in other frontier and beyond frontier regions of Europe, Africa and Asia. It is also hoped this project will have significance to other organisations such as Historic Environment Scotland and the National Museums of Scotland by enhancing knowledge and understanding of our cultural heritage to protect and conserve it. Not only does the past generate public appreciation and curiosity to learn and discover more, but by being more aware of our past enables us to make better decisions in the here and now for future generations. This includes environmental decisions, as well as the care and management of our heritage and archaeological sites.