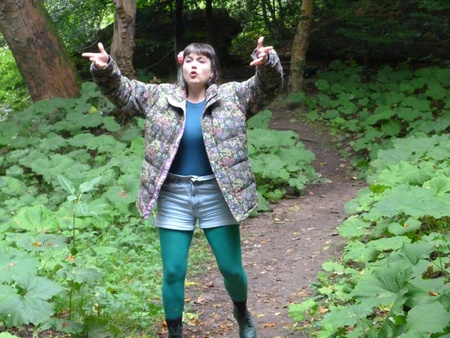 Dr. Katya Dimitrova-Petrova, honorary research fellow at the Geography Department expresses her passion for science and poetry through an educational poem and rap song about beavers

The Castor rap (from the Latin name Castor for beaver) rhymes through beaver habits and the history of their (near) extinction in Europe and North America. The multiple effects of beaver activity on hydrology (e.g. reducing flood peaks) are discussed together with land degradation challenges which rewilding with beavers may be able to tackle. The song is both critical about humanity’s impact on the landscape as well as an invitation to dialogue.

The scientist and artist Dr. Katya Dimitrova-Petrova, honorary research fellow at the Geography Department completed a PhD in Hydrology at the University of Aberdeen on subsurface water storage in agricultural Scotland. In addition to writing up her findings in scientific articles, Katya enjoys distilling her findings into poems/rhymes.

My passion for hydrology and arts naturally flowed into rhymes when I learned about the values of beavers as ecosystem engineers" Dr. Katya Dimitrova, Hon. Research fellow at the Geography Department, University of Aberdeen

When her last project led her to carry out an extensive literature review on the effect of beavers on water resources across the world, Katya learned about the history of beavers’ near extinction, as well as the political and socioeconomic issues around their reintroduction into landscapes where they are currently no longer present or abundant and started funelling her knowledge into a poetry that later become a rap.

This is not the first Science-Art collaboration Katya is involved in. She also collaborates as a co-editor in the visual art section of the Consilience journal for scientific poetry and art. ‘Communicating science is sometimes almost as important as science itself’, Katya says ‘especially in the digital world we are living in. Hence, we should always think about innovative ways to reach a wider audience.’

The art team collaborating on this project: Katya (@DimitrovaKatyon) took lead on the science and lyrics and Scottish artist Mark Grundy (IG @markgrundyart) lead the video and sound production. His son Rory Grundy, who is only 10 y/o, reproduced accurately the cacophony of a fully functioning beaver wetland and their fellow artist friend Isaac Jackson put together the catchy beat (IG @ijmj.uk).