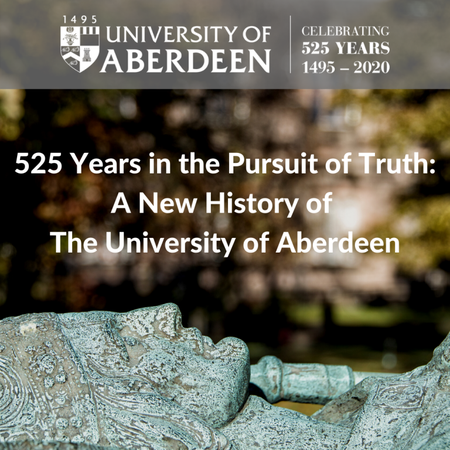 A podcast series that will present a new history of The University of Aberdeen, one that accounts for the University's activities in the transnational and global transmission of ideas since its foundation.

From its ancient origins in the 1495 founding of King’s College through to thriving global endeavours in 2020, the University of Aberdeen boasts a historic legacy spanning 525 years of leading and engaging with intellectual currents of the wider world. Yet quatercentenary and quincentennial memorial histories of the University of Aberdeen portray the institution from a regional and national perspective.

This podcast series, drawn from a forthcoming edited volume to be published by Aberdeen University Press, presents a new history of the University of Aberdeen, one that accounts for the University’s activities in the transnational and global transmission of ideas since its foundation.

Episode 1 - Before and after Bishop Elphinstone: Creativity and learning in medieval and renaissance Aberdeen

King’s College has a prehistory.  Dr Jackson Armstrong sheds new light on the founding of King’s College as a kingdom-building endeavour that underscored Scottish engagement with the age of the renaissance.  This involved the tenure of Archdeacon John Barbour at the medieval cathedral of St Machar’s by the Don, who in the 1380s composed The Brus—an epic poem that is considered to be the foundational work of Scots literature—and in the chantry chaplains of St Nicholas in the adjacent royal burgh on the Dee.

Episode 2 - The Local Rise and International Role of Marischal College, 1593-1860

From its inception the purpose of Marischal College is fascinating.  Most historical discussion has centred on its being a more seriously ‘Protestant’ alternative to the Episcopal (by which many mean crypto-Catholic) King’s College in Old Aberdeen. Unfortunately, this does not hold up to scrutiny. Founded as a civic university that catered to the sons of Aberdeen’s elite, Marischal prepared young men for careers in medicine, religion, and ‘commerce’ (broadly defined).

Consequently, King’s and Marischal developed different international ‘profiles’ that reflected their diverging institutional objectives. What defined Marischal from its inception to the union of the two colleges in 1860 was its international student mobility both in students leaving Marischal for a life abroad and for those coming to Aberdeen from the far corners not only of the British imperial world but even further afield.

Professor Naphy surveys the global and institutional history of Marischal College from its founding to the union of 1860. Marischal may have started as an institution for educating the children of local elites but the civic university attracted international students as an ideal destination to prepare young men for public life, which gradually elevated its reputation beyond the northeast of Scotland as an institution firmly embedded not only in Aberdeen but also the wider world.

The endowment of a chair in Mathematics in 1613 was one of Duncan Liddel's most important legacies for Marischal College. After a life of study in Poland and Northern Germany, and a career of over ten years at one of Germany's famous Protestant reform universities in Helmstedt, under the patronage of Julius of Brunswick-Wolfenbüttel, Liddel returned to Aberdeen to dedicate his last years to the support of students of Mathematics, a hitherto neglected and little renowned academic discipline. Liddel's subject expertise in Medicine and Mathematics suited the practical curriculum of Marischal College which served the sons of the burgesses and merchants of Aberdeen.

Through figures such as Liddel, Aberdeen's local focus connected with globalising interests in the continental republic of letters. They also showcase the existence of an early interdisciplinary knowledge culture at Aberdeen's two colleges and a widespread religious irenicism practiced in the North-East of Scotland. Professor Friedrich discusses Liddel's impact on the exchange of knowledge during the Northern European Renaissance and its transmission to and from Scotland, where it contributed to a 'whole system of philosophising in the foreign manner', as John Dee noted. Liddel provided not only an impetus for curriculum development at Marischal and King's Colleges, but also imported the didactic ideas of Philipp Melanchthon and his focus on a more science-oriented curriculum—the teaching of Copernicus's and Brahe's heliocentrism as well as the struggle to reconcile scholasticism and Aristotelianism—which underpinned the foundations for the development of a Scottish Enlightenment.

The intellectual history of the Aberdeen Philosophical Society, known as the ‘Wise Club’ after its founding in 1758, maps onto the institutional history of King’s and Marischal colleges in the eighteenth century. The proceedings of philosophical and literary societies were woven into the fabric of eighteenth-century Scottish Enlightenment intellectual culture, and, in particular, they promoted collaborative knowledge exchange within a university community.

Following this Scottish pattern in higher education, fourteen of the fifteen Wise Club members, which included Thomas Reid (1710-96), George Campbell (1719-96) and James Beattie (1735-1803), were alumni of and/or held positions at Aberdeen colleges. In spite of unsuccessful attempts to formally unite King’s and Marischal in 1747, 1754, 1770-72 and 1785-87, this cluster of relatively few academics advanced a concerted Aberdeen Enlightenment between 1758 and 1773. Dr Bow contextualises the scientific cultivation of natural knowledge in the thought of Reid as a defining pursuit of the Aberdeen Enlightenment and origin of the Scottish School of common sense philosophy—Scotland’s most successful invisible export by the turn of the nineteenth century. Beyond informing the curricular reforms at Aberdeen colleges, the fruit of the Wise Club’s discourse transformed approaches to moral and intellectual improvement at universities throughout the eighteenth- and nineteenth-century Atlantic world.

In 1773 James Beattie, professor of Moral Philosophy and Logic at Marischal College, Aberdeen, visited London to petition (successfully) for a royal pension on the back of his sudden fame as author of An Essay on the Nature and Immutability of Truth, In Opposition to Sophistry and Scepticism (1770), an attack on the ‘infidelity’ of the times, and the writings of David Hume in particular.

While in London, Beattie sat for the preeminent English portrait painter of the age, Sir Joshua Reynolds, who, as Beattie wrote in a letter of 21 August 1773 to his friend Elizabeth Montagu, planned ‘a sort of allegorical portrait [of Beattie] representing the triumph of truth over scepticism and infidelity’. Exhibited in 1774 at the Royal Academy, Reynolds’s ‘The Triumph of Truth, with a Portrait of a Gentleman’, shows Beattie, in his Doctor of Laws gown and band, dramatically lit against a stormy background; he smiles modestly, and grips a copy of his book of philosophy, while his enemies, Voltaire and Hume, are confounded and thrust into the darkness. Reynolds’s portrait generated criticism of artist and sitter, the former for his ridiculed suggestion that Beattie was a greater philosopher than Hume or Voltaire, the latter for vanity. Yet ‘The Triumph of Truth’ succeeds in capturing the drama of philosophical controversy in the second half of the eighteenth century.

Professor Jones examines Beattie’s response to Hume and Voltaire across his career, in a variety of genres, with particular reference to his manuscript prose allegory, ‘The Castle of Scepticism’ (composed 1767), his Essay on […] Truth, and his poem The Minstrel; or, the Progress of Genius (Book One: 1771; Book Two: 1774). In the nineteenth century, The Minstrel would function as an important precursor text for Lord Byron’s Childe Harold’s Pilgrimage (1812-18) and William Wordsworth’s The Prelude (posthumously published 1850). Beattie’s philosophy and poetry sheds light not only on the debates that animated King’s and Marischal colleges in the eighteenth century, but also on the role of the Aberdeen Enlightenment in the development of Romanticism in Scotland and beyond.

This podcast explores the life and influence of the Rev. James Ramsay, an Anglican priest, ship’s surgeon, and pioneering abolitionist who was educated at King’s College between 1749 and 1753. Ramsay’s anti-slavery convictions were born out of the experience of fifteen years as a preacher and medical attendant to the enslaved population of the island of St Christopher (St. Kitts). His abolitionist tracts of 1784-1787 were the most influential publications in the years leading up to abolitionism becoming an organised movement.

Cairns Craig, Glucksman Professor of Irish and Scottish Studies, recounts the influence of the first holder of the chair in English Literature at Aberdeen University, Professor H.J.C. Grierson. Grierson was closely involved with major poets of the early twentieth century, such as W.B. Yeats and T.S. Eliot, because of the influence of his edition of the poems of John Donne (OUP, 1912), which set the standard for the critical analysis of poetry for next half century.

In this year of the 525th anniversary of the University of Aberdeen, its Department of Economics is also celebrating an anniversary – the centenary of the Jaffrey Chair in Political Economy.  This podcast by Economics Professor Keith Bender highlights the life of Sir Thomas Jaffrey Bt, the early 20th century Aberdonian banker and philanthropist who endowed the Chair, and explores the history of the Department of Economics through the seven people who have held the Chair.

This podcast focuses on the career of one of the University’s major benefactors at the turn of the twentieth Century, its Forres-born Chancellor Donald Smith, Lord Strathcona from 1897. It traces his connection to the University and then tracks back, looking at how he acquired wealth and prestige at the heart of the transition in British North America from a fur trading empire to a settler-dominated confederation. It contributes to the consideration of legacies of empire in and beyond the University today by emphasising the need to take account of the multifaceted nature of empire itself.

Episode 10 - 525 Years of Collecting and Care: The libraries, archives and museums of the University of Aberdeen

For 525 years, the historic libraries, archives and museum of the University of Aberdeen have been enriched by donations, gifts and acquisitions leading to collections which are now of international significance. As a curator of that historic material, Jane Pirie identifies key donors and figures involved in the care and formation of collections from the founding of King’s and Marischal Colleges through to their union in the University of Aberdeen.

Whilst there are items that reflect the teaching and curriculum of the university, others are indicative of the personal tastes of donors, their particular interests or studies, their political and religious views and even their personal wealth. The importance of books, archives and objects to the institutions will be explored by reflecting on the development over the last 500 years of specialist roles, intended to ensure that the collections were managed, housed, conserved and used in different ways, with specific institutional aims. The podcast concludes by bringing the story of the collections up to date with emphasis on the current role of Museums & Special Collections in teaching, research and public engagement with an important regional role and global outlook.