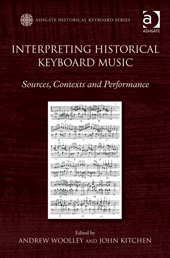 Prof. David J. Smith is thrilled to see the arrival of the first volume of a series he founded with Andrew Woolley (Bangor University), and of which he is Series Editor.

After the first International Conference on Historical Keyboard Music, David realised that there was no obvious identifiable place in which contributors could publish their research, whilst the success of the conference suggested that there was enough research going on in this area to make a series viable. He teamed up with one of the conference organisers to propose such a series to Ashgate, and Interpreting Historical Keyboard Music is the result. Alongside is own contribution on William Byrd, his students and the English keyboard dance are essays on all manner of keyboard music from the sixteenth century to the nineteenth.  The wide-ranging content is an ideal way to begin the series for, as David points out, ‘the series is intended to be as inclusive as possible: historical is not intended to imply any particular approach, and contributions from organologists, performers are just as welcome as from editors and musicologists. Similarly, historical can take us up to the very recent past.’