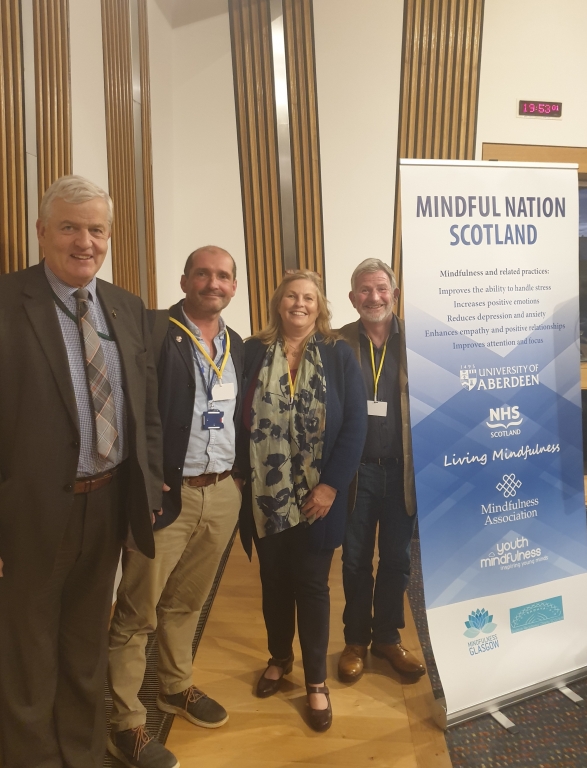 On 17 September Mindful Nation Scotland, a collaboration of Scottish Mindfulness training and research organisations including the University of Aberdeen, delivered A Scottish Mindfulness Event at the Scottish Parliament in Holyrood. The event was hosted by Maurice Corry (Scottish Conservative and Unionist MSP).

Colette Savage and Dr Graeme Nixon represented the university. Attended by several MSPs, the event was to highlight the significant levels of mindfulness training currently taking place in the public, private and third-sector of Scotland and to present evidence illustrating the impact of mindfulness-based interventions for health, well-being and leadership.

It was also the launch for mindfulness training to be given to MSPs in early October.

This is part of a wider programme following on from the Mindful Nation report, which has seen the mindfulness initiative deliver training at over 40 parliaments worldwide.

MSPs heard about the range and interests of graduates from University of Aberdeen and the work of other providers within Scotland, many of whom were graduates of Univserity of Aberdeen.

Chris Ruane (Labour Party) and Jamie Bristow (Director of The Mindfulness Initiative, Secretariat to the UK Mindfulness All-Party Parliamentary Group) travelled from Wales and Sheffield respectively, to speak about their experience of mindfulness at Westminster Parliament and other parliaments across the world.

A very successful evening with over 50 people in attendance and a great opportunity to highlight the MSc in Mindfulness course, offered by the School of Education, which is now in its 10th year and the biggest MSc programme in the university.