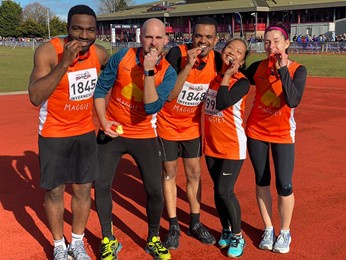 Dental students Ndo, David, Owens, Nishu and Chelsea not only performed brilliantly at the Inverness Half Marathon on Sunday, 8th March, they also smashed their £500 fundraising target for Maggie's Aberdeen.

First time marathon runners David, Nishu and Owens all did exceptionally well.  Nishu more than exceeded her own expectations finishing in a very swift 1:50:57 and Owens did slightly better than his initial 3 hour estimate to finish in 1:59:50! Owens was shortly followed by David, who ran a very strong 2:03:49, despite facing multiple injuries throughout training; once he was in bed, David concluded it was 'a good experience' after all!  Ndo and Chelsea both hoped to achieve personal bests and they did just that. Ndo ran an absolute blinder to finish in 1:42:23 and Chelsea also managed a PB to finish in 1:40:09.

The group would like to send a huge THANK YOU to every single person who donated and/or supported them in running the Inverness Half Marathon. The total amount raised to date stands at £1090.38 for Maggie's Aberdeen. This is more than double the original target of £500 and will hopefully go a long way to helping people currently fighting cancer, who rely on Maggie's for its support.

Maggie’s ‘pebble’ building opened at Foresterhill in 2013. The University of Aberdeen’s own Chancellor, HRH The Duchess of Rothesay, is the charity’s proud President.  Maggie’s centres across the UK offer free cancer support and information as well as courses, workshops and support groups.