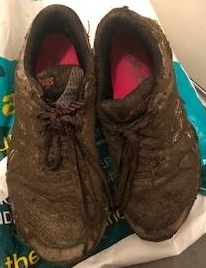 At the end of October University and NHSG staff and students at the Institute of Dentistry donned their pedometers and set out in teams of five to record their steps for the next four weeks as part of the "Paths for All Autumn Step Count Challenge".

“Paths for All” is a Scottish charity who champion everyday walking for a happier, healthier Scotland, tackling health issues such as obesity, cancer, heart disease, depression and dementia as well as creating opportunities to reduce loneliness and social isolation – overall, creating health equalities for all.

The idea to become involved in the Autumn Step Count Challenge was proposed by Dr Smith of the Athena SWAN team, to bring University and NHSG colleagues together as well as to increase fitness and wellbeing at the Institute.  With some imaginative team names the steppers progress was charted on leader boards which appeared around the Institute.  The challenge ended in a close-run final with only 16,010 steps between first and second place.

We offer our congratulations to the winning steppers, the ADI Molar Misfits, who logged a massive 1,756,434 steps.  In second place were the ADI Crushing Canines at 1,740,424 steps.  The Institute of Dentistry Slugs slivered their way into third place with 1,611,968 steps.   With a team member down, the four person team A Step Wise Too Far came in at a very respectable fourth place with 1,483,507 steps.

The four-week challenge created a lot of conversation and friendly rivalry across the Institute.  Everyone wanted to count their steps whenever possible, although Dr Stewart did admit that placing his pedometer in his sock whilst playing basket ball was not a good idea.  Dr Horner also realised that to log steps it would be ideal if the pedometer was not left in ones’ locker…  Dr Cherukara became very enthused by the competition and frequently left his car in the Institute car park, preferring to walk to and from work.  It is even reported that he walked home from Aberdeen Airport.  Well done Dr Cherukara!  Dr Cunningham enjoyed a weekend away in London and rather than take the tube she managed to walk 12 kilometres around the London sights.  Her dog Goose has also massively enjoyed the need for more steps!  Dr Gall certainly won the prize for the muddiest stepper!  She valiantly took part in the Silvery Tay Trail Race in Wormit (just over the river from Dundee) where it was horrendously muddy – more sliding in mud than running! It did however give Dr Gall her best step count day of the competition.  An incredible 61,481 steps were clocked by Lorraine Middleton at the Jury’s Inn Aberdeen Airport over a dance weekend – well done Lorraine, perhaps Dr Cherukara should have dropped by too to up his count!

Over the four-week period the 10 competing teams totalled 13, 545, 297 steps between them. We hope to encourage even more staff and students to take part in the Spring Challenge which will last a total of eight weeks.

To read more about ‘Paths for All’ and forthcoming ‘Step Count Challenges’ please visit their website: https://www.pathsforall.org.uk/about/about-us-1