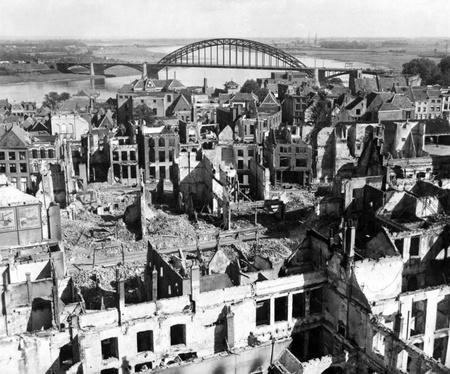 This week marks the 75th anniversary of Operation Market Garden, an audacious plan by British military leader, Field Marshall Bernard Montgomery. The military operation could have brought the Second War to an end a year early.

Sadly, the planned failed and the war continued for another year before Europe was fully liberated from Nazi control. Throughout the plan there are a host of leadership lessons which are worth considering in the current era. The lessons from Market Garden are shared extensively with military chiefs in their leadership development. However, the lessons have resonance for political, public and private sector leaders with a number of warnings worth heeding:

The Operation to land British paratroopers at various bridge heads throughout Europe and then race an armoured corps through these holding points and over the Rhine is well told in the book (and film of the same name) A Bridge Too Far. Cornelius Ryan’s 1974 book and Richard Attenborough’s 1977 film are a staple for military leaders learning. Since then Anthony Beevor (2018) has revised thinking on the operation through his publication Arnhem. Despite the revisionist critique, the central question remains as to whether Montgomery was too ambitious in his plan? Did he go a bridge too far?

The British Parachute Regiment who were dropped at the last bridge over the Rhine, Arnhem Bridge, were left there for days without the armoured division arriving at the planned time to relieve them. Both the armoured division and the paratroopers suffered heavily in this bold, and ultimately unsuccessful, plan. Today’s senior public service leaders considering their ‘public value’ might reflect on Moore’s strategic triangle. Within this, capacity is a key pillar both in physical resource and staffing. Making strategic plans manageable, and yet with ambitious stretch targets built in, is a pressing concern for senior leaders.

2) Not listening to lower ranks and good intelligence.

Local and military intelligence was presented to senior military officers that showed that German Armoured Panzer Divisions may have been moved to the Arnhem areas where British paratroopers were to be dropped at drop zones. This intelligence ran counter to assumptions which few wanted to revise. The intelligence was not taken on board by senior officers who were keen to press on with the plan.

I had a recent conversation with a military leader about distributed and cooperative leadership models which, perhaps, sit opposite to ‘command and control’ leadership models often associated with uniformed services. In certain situations, direct leadership approaches apply best, especially perhaps in situational operational leadership roles with fast changing scenarios and life or death challenges. However, particularly in strategic planning, communications chains must be in place to allow for information to flow both directions within an organisation and for communications, and moreover the culture, to allow for anyone at any level to share innovative ideas and indeed raise pertinent concerns.

In a recent leadership lecture the current leader of the British Army, Major General Bob Bruce made an insightful comment on leadership learning and practice when he said; “a good idea has no rank.” We might consider in all our organisations both how strategic plans percolate and are enacted throughout the organisation, but also how input from front line staff is effectively fed to executive levels and also acted upon where appropriate.

3) Risk Assessment and having a Plan B.

When the Parachute Regiment landed around Arnhem Bridge and surrounding areas, they found that their radio equipment did not work in the Dutch countryside. The importance of communications is clear but also the need to have a Plan B. Were these potential communications break down risk assessed? If it has potential, it needs planned for.

A second challenge presented itself when the dropping of Polish Paratroopers in follow up phases of the Operation were seriously delayed by poor weather and fog. This caused a problem for those on the ground awaiting back up. Moreover, it led to a disaster for the Polish paratroopers when they were eventually dropped at drop zones which had now been well re-enforced by German troops, now alert to the airborne assault.

It is always better to discuss risks and seek out contingency plans in the cold light of day rather than when hit with them real time. Having risk assessments, business continuity and mitigation plans in place aides not only the chances of success but also sustainability in organisations.

When I worked in education leadership roles, I was often asked about closing a school because of some ‘unforeseen’ issue. The default starting position was to go to the Business Continuity Plan which should cover how normal operations will continue at alternative scoped venues. During my time working in the leisure industry I both enacted and wrote Normal Operating Procedures and Emergency Actions Plans for a number of facilities. It is worth checking if these sorts of plans exist in your establishment. If they are not the leadership imperative would be to flag up this issue and ensure something is in place.

Montgomery and American General Patton both wanted to be the first to enter Berlin and end the Second World War. Whilst we all want to achieve success, team and organisational goals should work alongside personal goals and the forming and execution of the plan should take both the team and leader with them. We have all seen the cartoon graphic images of the leader at the top of the mountain with the team either lagging behind or having dropped off at the other end of the mountain. Where is the leader in your image- at the top; in the middle helping others; or behind and shepherding the team towards the top?

Within a public service environment, personal goals must be aligned and squared against Public Value. Professor Mark Moore’s work on Public Value (1997) encourages leaders to consider the purpose/mission/goals in terms of value; the capacities and capability of the team and technology; and lastly and importantly in a political environment, the legitimacy and support for the actions. In public service work entrepreneurial enterprise can clash with political permissions. Consideration of this is key for leaders operating in a political environ. In most leadership roles there is a political dynamic to consider- be it line managers; political leaders; governance boards or shareholders. Due consideration of where your leadership starts, and finishes is critical to sustainable success.

5) You can only progress as fast as your slowest unit.

Whilst we may all want to progress at pace, leadership requires us to bring everyone with us. That requires encouraging progress but also planning appropriately. The holdup of the Armoured Divisions, XXX Corps, caused serious issues to the overall mission in Operation Market Garden. Bridges being knocked out, a single-track road for tanks to travel along and air strikes all slowed the progress of the Armoured Division who were supposed to proceed at pace through Eindhoven, Son, St Oedenrode, Veghel, Grave, Nijmegen and then onto Arnhem Bridge. Each hold up had an iterative effect on the overall plan. Effective planning and consideration of dependencies in that plan are key. For if one part of the plan fails, or slows, what is the impact of that on the overall plan?

In the public sector there is much consideration now of systems-wide leadership. In this, there should be a recognition of the multiple moving parts of an organisation and how each of them can impact on another. Like in Operation Market Garden, if one part of the plan fails or is delayed, it can have a significant impact on other parts and critical success. Those working with Project Management approaches would spend much time planning the ‘critical path’ and ensuring that dependencies and worst-case scenario delays were factored in. This ensures more chance of successful delivery on time and on spec.

Much criticism has been aimed at Montgomery over the years, however, it can be seen that leadership issues were present throughout the chain of command. Personality clashes between General Lewis Breton and Lieutenant General Fredrick ‘Boy’ Browning were noted, and historian Beevor suggested; “The only characteristic the men had in common was vanity” (2018:24).

Furthermore, whilst competition between Montgomery and Patton is noted above, there were also tensions between Montgomery and Lieutenant General Bradly. Beevor (2018:4) cites Eisenhower’s Chief of Staff (General Walter Bedell Smith) when he said; “It is amazing how good commanders get ruined when they develop a public they have to act up to. They become prima donna.”

Three final and concluding observations on these historic lessons might be useful. The first is a well-known military leadership lesson- ‘no plan survives first contact with the enemy.’ In the case of Operation Market Garden that was certainly the case as the plan, and its various sub plans, seemed to fall like a pack of dominoes as the Armoured Division attempted to move through the bridgeheads captured by paratroopers. Beevor said of the situation; “Like most of Operation Market Garden, almost everything went wrong, usually due to incompetence compounded with bad luck” (Beevor 2018:317).

We might consider how the lessons above could avert incompetent acts and also the impact of luck. As golfer Gary Player is reported to have said, “the more I practice the luckier I get.” However, reflecting the people side of leadership Polish Major General Sosabowski noted an important variability when he said; “Human abilities do have limits after all” (Beevor, 2018:28).

Operation Market Garden gives an insight to both the process and people leadership matters that impact on successful strategy. In the 75th anniversary of the Operation we remember those who lost their lives in those days, and we also seek to remember some of the lessons of history in the important work military, political, public and private leaders carry out today. The prophetic words “those who forget history are condemned to repeat it” are worth present-day leaders listening to.

Neil McLennan is Programme Director of the MSc Leadership in Professional Contexts. Neil is a former President of the Scottish Association of Teachers of History and taught history for many years.  In recent years he has been invited to deliver inputs to Army Officers as part of Sandhurst Military Group. In his office hangs David Shepherd OBE’s painting “Arnhem Bridge 5pm- The Second Day” as a sage leadership lesson.

The MSc Leadership in Professional Contexts programme caters for public service and uniformed services leaders learning and operates on a multi-perspectivity model, with leaders from across public services sharing experiences, professional reflections and learning.  More details of the course here:- https://on.abdn.ac.uk/leadership/