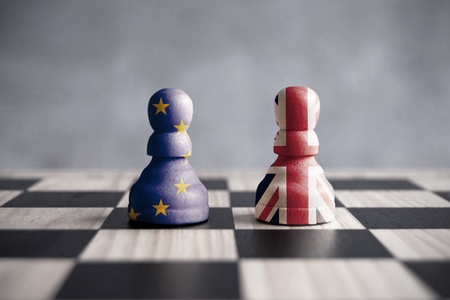 People say what goes around comes around. And it would seem that saying is particularly applicable to leaders in UK politics. In 2005, David Cameron, in his own scramble to secure his position as the Leader of the Conservative party, found himself buying off the right-leaning euro-sceptic section of his party with a promise of in “in-out” referendum on the UK’s continuing membership of the European Union. In so doing he lauded himself as the unity candidate, having support from all wings of the party. No doubt he felt this was a one-way bet: even if he had to live up to that promise, there surely could be no chance of the UK public voting for their own economic demise? Well, as we all now know, not only did the UK public vote “out”, but Prime Minister Cameron quickly exited Number 10 himself, leaving a divided nation and a divided Conservative Party. Be careful what you promise: what goes around comes around.

The result was the need for a new Tory leader. Theresa May was the first to step up: she heralded herself as “the best person to be prime minister”: apparently no more explanation was required. Subsequently, Theresa May became the sole candidate after some Shakespearian moves on the part of the colleagues of Boris Johnston and Andrea Leadsom removed all opposition. Rather than being the best person to be PM, she appeared to be the only person. But perhaps not? Rather, opposition parties, sensing opportunity, suggested that in the circumstances she should call a general election. However, the new Prime Minister resisted, saying that there was an important need for stability during the Brexit negotiations.

The Prime Minister May proved to be such a steady hand that her public approval ratings rose and with it the Tory party. No doubt unconnected with this (sarcasm intended), in a volte-face that would perhaps have had the not-for-turning Mrs Thatcher turning in her grave, Mrs May shocked the nation by calling an election, now claiming that there was an opportunity to bolster the government’s hand in the Brexit negotiations by returning the Tories with a large majority. Such “country-first” sentiments would surely go rewarded. However, the UK public were not so easily fooled. Instead, having cast their votes, on 9th June 2017 Prime Minister May found herself in an invidious position. Rather than being persuaded by the merits of the “strong and stable” mantra that was endlessly repeated, the public saw the ugly face of hubris and opportunism, and the Tories had lost their majority. What goes around comes around.

Surely this was a resignation moment for Prime Minister May? No! She insisted she had got the party (and perhaps country…) into this mess and she would get us out. There was a job to be done and she would do it. And, to the surprise of many, no one in the Tory party stepped up to mount a challenge. Moreover, despite the rocky road that PM May has since followed, and her continuing inability to cajole her cabinet into agreeing how Brexit should proceed having regard to the Customs Union and the Irish border, the PM remains in place. What can we learn from all of this?

Whatever else might be said, it would be commonly accepted that the UK Prime Minister is in a leadership role. A good place to start then is to examine the PM’s role as leader through the lens of leadership theory. But what makes a good leader? A common image that one might find is that of Winston Churchill, a man who appeared to lead through the force of his own convictions, judgements and personality. “Great man theory” (and yes, it really is that sexist) would fit with this view, suggesting that leaders emerge due to their superior traits: unlike many of us mere mortals great men are said to have a personality and set of abilities that separates them from the pack. They are “born leaders”. As a result they rise to the top, make good decisions, and people follow them. Many people would use this analysis of leadership. After all, is leadership not all about the individual: they are the right person no matter what the circumstances? Wrong! Most apparently great men, if great at all, were only so for a time, and then fell under the weight of their own contradictions. Indeed, Churchill is a good example of this, and he is one among many.

But if leaders are not born, and not necessarily men, what are they? Well one theory which would explain Churchill’s rise and fall would be situational leadership. This posits that different situations demand different kinds of leadership. When Great Britain was faced with what appeared to be almost certain defeat in 1940, and when many politicians considered that the only option was to sue for peace with Hitler, Churchill was one of few voices who saw things differently. Through the sheer force of his beliefs and personality, he kept Britain in the war, and ultimately prevailed. However, come the end of the war, he was promptly voted out of office when the public realised a different form of leadership was needed in a post-war recovery phase. No longer would the “fight them on the beaches” mentality take the country forward.

Likewise then, albeit in a very different way, Theresa May emerged from the Brexit calamity as the right sort of leader for the situation. Despite being a “remainer” she was seen to be a steady pair of hands: not to close to either of the extreme ends of the party to be rejected and cause a schism. And cerebral enough to work her intellect to steer a course through rough seas. Indeed, even after her own calamitous decision to call an early general election, she remained in place. Why? Because other options were seen to be worse. Boris Johnston and Michael Gove were considered too extreme. Other candidates perhaps felt that taking the reins at a time when the task of making Brexit work was an act of political folly. So, in the situation, Mrs May stayed in post. Even now, despite an almost constant narrative of leadership challenge none has emerged. But does that mean she is forever safe? No. When the situation changes the Conservative party will reassess what it needs in that situation and, I will predict boldly, there will be a change. The PM will ultimately exit through the door of number 10. What goes around comes around.

Dr Scott Allan is a Lecturer in Management Studies. He teaches on both postgraduate and undergraduate courses in business and management such as Business Strategy, Leadership, Managing Organizations and Interpersonal Management, Negotiation and Persuasion. In addition Scott undertakes research in the field of organisation theory, with a particular emphasis on the professions and management of professional services firms.