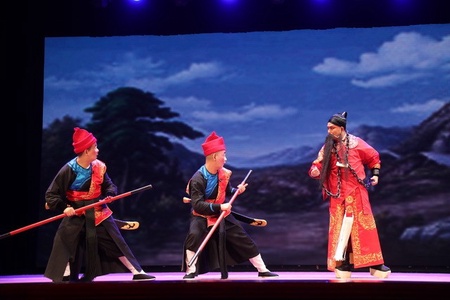 Dr Jieping Xiong of Wuhan University, China will give a fascinating insight into the Chu Opera adaptation of Shakespeare's Richard III. (Chu Opera Performance will take place the following day, Thursday 8th November at 2.30pm, and tickets are also avalaible on Eventbrite separately)

Shakespeare adapts and is adapted. Most of his plays are adapted from historical chronicles, legendary accounts and someone else’s plays to suit the then theatrical paradigm. Over the last hundred years, at least seventeen of his plays have been adapted into traditional or indigenous Chinese theatre, Shake-xiqu for short. Chinese theorists tend to classify them in three adaptation styles, namely, the Chinese, the Occidental, and the English-English, based on how traditional Chinese theatre receives them. On the other hand, Western theorists tend to classify them into adaptation, appropriation, expropriation, inspiration and spin-off, depending how much the adaptation deviates from Shakespeare linguistically and culturally.

In the intra-genre process of Richard III into Chinese Chu Opera Yu Ma Ji, or The Story of A Royal Horse Rider, the libretto for singing and chanting has to negotiate with the music that serves it. Music may have to vary without distorting the pattern of melody and rhythm. The librettist’s license may be confined to prosody. The choreography for dancing and acrobatics should help to portray the characters although traditional Chinese theatre is peopled with codified role types, hence cross-role-type performance in Shake-xiqu to curb deviation.

Tickets are free and can be booked through Eventbrite.