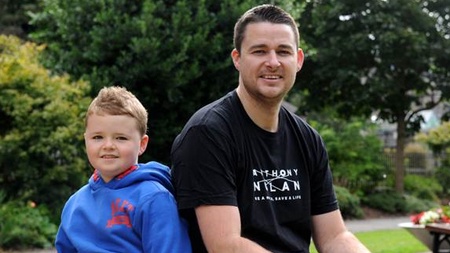 A University of Aberdeen student is to climb Ben Nevis seven times in seven days to raise awareness about a blood cancer that has affected his family.

Craig Smaaskjaer, who is about to start his fourth year of a degree in Film & Visual Culture with Politics, is raising the money for his nephew, 6-year-old James Hawick, who was diagnosed with Aplastic Anemia, a rare blood disorder which affects his immune system, in July earlier this year.

James’s family, who live in Shetland, were told he needed a bone marrow transplant, so the family turned to the Anthony Nolan charity in the hope of finding an unrelated donor.

Now the whole community are throwing themselves into raising awareness of the bone marrow donor register and funds for Anthony Nolan, with Craig taking up the daunting challenge of scaling the UK’s highest peak seven times in seven days.

Craig said: “I want to be able to fix him up and have a laugh like we do whenever we get to see each other. I wish it was me in his place, I would swap in an instant with him - we all would.

“We desperately need more people to sign up to the register. You could end up saving someone's life without it costing you a penny. You could change the lives of not just someone in need like James, but their entire family too. It is an incredibly powerful thing to be able to do.”

We desperately need more people to sign up to the register. You could end up saving someone's life without it costing you a penny." Craig Smaaskjaer

Craig has already raised £11,000 in sponsorship for his attempt, which starts on September 6. The Anthony Nolan charity have also experienced a big leap in potential donors from the Shetland Islands signing up on their website with 450 people applying  since July compared to around seven people in the same period last year. The charity is also coming to Shetland in September to take saliva samples to sign residents up to the register.

Craig said: “The response from the good people of Shetland and my town Aberdeen has been overwhelming – I just wasn’t ready for such a reaction. A local seven-year-old girl even forfeited her birthday party to sponsor me, and a local boy raised £500 by shaving off his hair – that left a lump in the throat, I can tell you!

“So many people are offering to donate their money and join the Anthony Nolan register. It shows how much support there is in this tight knit community, it’s so motivating to know we’re not alone.”

The 7in7 for James team will also be attending the University of Aberdeen’s Fresher’s Fayre in an attempt to get Freshers signed up onto the Anthony Nolan register.

Amy Bartlett, Regional Register Development Manager at Anthony Nolan, added: “James’s story highlights how much we rely on the remarkable people who join our register and pledge to save a life by donating their bone marrow or stem cells. What many people don’t realise is how easy it is to join the bone marrow register – it simply involves filling in a form and providing a saliva sample. We urgently need more young men to sign up as they are the most likely to be chosen to donate but are under-represented on the register.”