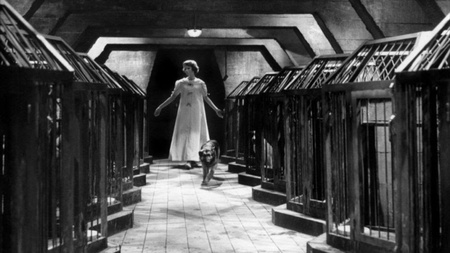 This semester, Film and Visual Culture (FVC) Honours students were given the chance to study an interdisciplinary course taught by Dr Silvia Casini. Cinema and Science: Beyond Science Fiction invited students to consider the relationship between science and cinema through nine weekly themes and four guest speakers. Themes ranged from the representation of scientists and science spaces in films, to the early history of visual culture and its uses for scientific fields like medicine and physiology, and exploring the relationship between science and the lay public.

Our assigned readings combined film theory with a range of scientific journal articles and book chapters to create an understanding of both form and content, as well as historical or cultural contexts, of the visual materials we engaged with. As a film student, I struggled to understand many of the scientific concepts we were introduced to but found comfort in my fellow film students expressing the same struggles.

When a group of medicine students joined the course, everything seemed to fall into place. FVC students were able to provide their own specific knowledges about a breadth of humanity subjects, such as film theory, philosophy and art history, whereas medicine students provided us with more in-depth understandings of the scientific topics at hand, and, most importantly, a new perspective. When analysing visual material, FVC students often form a mental checklist for analysis; we know what to look for in the cinematography, mise-en-scène or intertextual references. However, medicine students approached the material in different and engaging ways, often noticing themes and references that had not previously been brought up, bringing a whole new dimension to our discussions.

Guest speakers provided us with industry insight into the relations between science and cinema/visual culture. We were introduced to the discipline of medical humanities, science film festivals, fine art and sculpting, and recent academic research on a film we had studied ourselves. It brought a practical element to the theoretical work we were doing, and showed the diverse possibilities of combining art and science and gave us a glimpse into different career path options!

Finally, each student submitted a practical assignment and a reflective essay on the creative process. Everyone was given the same prompt: to create a practical piece of work that related to the course’s theme of cinema and science. Upon presenting our productions to each other, it was fascinating to see how unique each piece of content was, both in its form and in the themes it engaged with.

Exploring medical humanities was something I never thought I would do during my film degree, but it has given me a new perspective on the possibilities of my own degree and has maybe even provided me with my new favourite research area, leading me to explore postgraduate opportunities in Aberdeen and career paths I had never considered before!