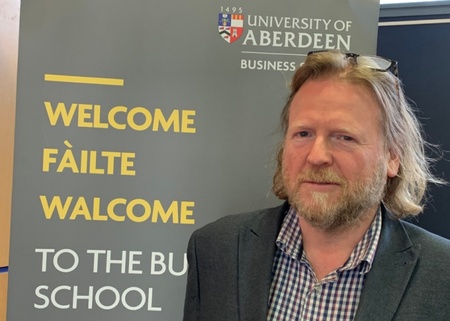 Professor John Skåtun, Chair in Economics at the University of Aberdeen Business School, argues that with vaccine hesitancy on the rise, policymakers need to consider the use of financial penalties for those not prepared to consider the societal benefit of immunisation.

Measles is a serious disease. So recent flare-ups have caused grave concerns. Many blame recurring outbreaks on misinformation leading some parents to the seemingly ill-judged decision not to vaccinate their children. Whilst there is undoubtedly truth in this narrative, there are other malevolent forces in play. For it is not clear why most infectious diseases refuse to go away. Like Dracula in Hammer Horror films they seem near impossible to kill off. Though every time at the end of a film Dracula has a wooden stake plunged through his heart, and the audience lets out a sigh of relief, collective amnesia still sets in when in the sequel the count reappears, fangs and all, ready to distribute the evils of the undead. And so it is with infectious diseases. As soon as an outbreak is over and we all relax we should not forget that the disease will return to spread its harmful virus, unless it is irrevocably eradicated.

Despite medical progress, just one infectious disease has been defeated by human endeavour. It took nearly two hundred years from the small pox vaccination discovery of Edward Jenner in 1798 until small pox was declared eradicated by the World Health Organisation in 1980.  So here are two puzzles. Why did it take so long to eliminate a disease when a vaccination had been available? And why have we failed to eradicate other infectious diseases?

Whilst the answers to these puzzles are many and complex - involving logistical problems concerning the delivery of fully comprehensive and global reaching vaccination programs - there are also economic forces in play. Though economists are not best equipped to understand the chemistry of vaccinations, the medical efficacy or the logistical details of vaccination delivery, they possess instead a methodology capable of tracing the behavioural responses that make infectious diseases so very difficult to kill off.

There is not a vaccination around without side effects - some worse than others, some misunderstood and some grossly exaggerated through bad science.  No matter, when looking through an economic lens (and we view the public health target individual as an economic agent, who naturally weighs the benefits of vaccinations against the perceived costs) we can draw some stark conclusions summarised in three economic lessons below.

Typically, the problem of leaving vaccinations to individuals is one where personal choice does not necessarily coincide with what is socially optimal. That is, purely self-serving individuals do not necessarily consider the consequences to others. It is an example of what in economics is termed the problem of externalities. Whilst not choosing to vaccinate oneself may be perfectly rational, when the risks of the side effects seem too high such individual decisions often ignore the detrimental effects on the wider population.

For the individual the benefit of a vaccination is the near certain avoidance of the disease. This benefit is greatest at the height of an outbreak, as illustrated under recent measles flare-ups in the UK, when the unprotected suddenly all flocked in panic to their GPs demanding vaccinations. However, as vaccination take-up rates increase, the prevalence rate declines and the benefit to the individual falls. At the same time the perceived personal risk from side effects stays constant throughout. There comes a point for some when disease prevalence rates are low enough for the perceived risk of side effects to outweigh the benefits of vaccination. What then is the economic conclusion? Well, in short, it is that voluntary vaccinations alone are unlikely to eradicate a disease.

Given the lessons above, is the Westminster Health Minister Matt Hancock’s suggestion of making the MMR vaccination compulsory sensible? Whilst some economists might propose such a blunt tool, economists more generally advocate so called Pigouvian taxes (subsidies) to rectify private under-provision. Thus, they seek to incentivise target groups by introducing a price of inaction (or reward for action). The individual refusing the vaccination is now compelled to pay a tax to reflect the magnitude of damage he/she is inflicting on society. The policy works as individuals seek to limit their tax liability. And with proper monitoring the only way to circumvent taxes is to vaccinate. If, as often argued, the damage to society is considerable then taxes must be substantial.  A successful policy demands a high tax to ensure a sufficiently high compliance to eradicate the disease. Alternatively, governments/public health authorities could offer a subsidy to individuals who take the vaccination. Thus in this latter case “good behaviour” is rewarded and incentivised.

The Summary: Learning from the Lessons.

These simple lessons tell us that individuals do not necessarily act in the interest of society. If unchecked this means diseases are very difficult to eradicate. However, all is not lost. There are tools available that are currently not utilised.  A typical economic solution proposes using the tax system to incentivise individuals. For these vicious diseases to be finally laid to rest with wooden stakes plunged through their hearts, leaving absolutely no possibility of a sequel, requires the use of as many available instruments as possible. This short piece therefore argues for the inclusion of taxes and subsidies in the toolbox that together can be used to constitute and shape such wooden stakes.

A version of this article appeared on the Economist website’s ‘Perspectives’ section on July 3rd, 2019 LINK