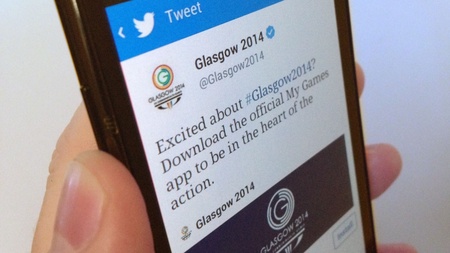 Social media's role in managing transport and congestion during the Commonwealth Games will be monitored and examined by experts from the University of Aberdeen.

The study, focussing specifically on Twitter, aims to understand more about how travel information is disseminated online, and what the most effective ways to spread the word are.

Research team member Professor Jillian Anable commented: “When you have a big event, such as the Commonwealth Games, it puts a lot of pressure on the transport infrastructure for a sustained period of time.

“You have a lot of people who are visiting the city for the first time, and who need to find their way around. So it’s about finding out how Twitter can inform people and what type of information spreads furthest.

“Among many other aspects, we’ll be looking at who tweets it first, and what are the conversations that get the most traffic.

“The data that we generate over the course of the study will feed into the discussion about social media’s role in planning, transport and the logistics of informing people during a big event.”

The data that we generate over the course of the study will feed into the discussion about social media's role in planning, transport and the logistics of informing people during a big event." Professor Jillian Anable

Computer Scientists from the dot.rural Hub have created specialised software that can track and analyse the diffusion of each tweet.

In addition to analysing the impact and spread of individual messages on Twitter, the team will also try to record whether a tweet is positive or negative.

“We’re going to try and do something called sentiment analysis. During a disruption there will invariably be some constructive tweets that are factual, such as, “avoid subway X because of situation Y, whilst other tweets will just be angry rants, with no constructive information. We want to get a handle on the language or sentiment behind the tweet and what impact that sentiment has.

“My particular interest is when someone experiences a city for the first time; their first impressions can carry more weight than subsequent visits. So if someone arrives in Glasgow this summer and has a good experience with public transport then they are more likely to use it again in the future. It’s the legacy of people’s experiences that I am particularly interested in.”

The team have interviewed public transport operators and Commonwealth Games organisers in preparation for the study.

dot.rural is the RCUK Digital Economy Hub, based at the University of Aberdeen, focusing on the rural digital economy. Rural areas have specific characteristics that create challenges around issues such as quality of life and wealth creation. These include: small, often dispersed populations; narrow and uneven channels of information flow; rapid change in population structures and economic activity bases; and restricted access to digital infrastructure. We believe that rural areas of the UK can, through the user-led application of digital technology, be more economically, socially and environmentally sustainable. Our aim is to harness the Hub's expertise with a range of partners to realise this ambition. Our activities are organised around nine challenges: Digital Society, Enterprise & Culture, Healthcare, Intelligent Information Infrastructures, Intelligent Mobility, Internet Engineering, Natural Language Generation & Affective Communication, Natural Resource Conservation and Social Media . For more information on dot.rural visit www.dotrural.ac.uk, email dotruralsecretary@abdn.ac.uk or phone +44 (0) 1224 274065.