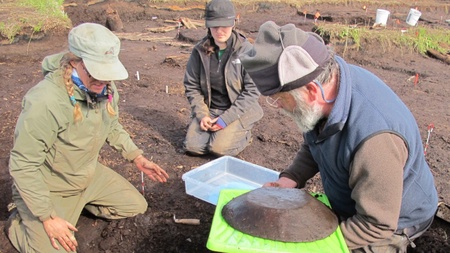 A race to save one of the world's best preserved examples of a lost society has been boosted by a major £1million research grant.

The dig in western Alaska is revealing never seen before artefacts as well as providing clues to how past societies dealt with climate change and how global warming could affect us in the future.

Residents of the Yup’ik Eskimo village of Quinhagak first called in archaeologists from the University of Aberdeen in 2009 to carry out a rescue dig after observing their coastline being washed away as a consequence of global warming.

Within hours of beginning, the team, working alongside local archaeologists, located a 700-year-old village site which was falling into the sea.

Amongst the site were hundreds of immaculate artefacts which had been preserved by the permafrost, but were now exposed to the elements because of the thaw.

“The first thing we found was a complete wooden doll with the original paint still on it,” explains project leader Dr Rick Knecht of the University of Aberdeen. “It’s quite incredible – leather, fur, plants, even 400-year-old grass that has been completely preserved intact because they’ve been frozen all this time. Instead of looking at stones and bones, like archaeologists usually look at, we’ve got wooden artefacts - pieces of organic material.

“The exposed archaeological site was rapidly eroding away because of global warming – you’ve got rising sea level, and the permafrost is melting. The soil is held together by the ice, so when the ice melts the soil becomes very vulnerable to marine erosion.

“Although there is an overall ongoing trend of global warming, climate change is not just about temperatures increasing, but also about more erratic and sometimes extreme weather conditions,” added project co-investigator, Dr. Kate Britton, also of the University of Aberdeen. “We are all seeing the evidence of this here in the UK right now with storms and flooding, and the plummeting temperatures across North America. On the Bering Sea coast of Alaska, the combination of sea level rise, permafrost melting and increasingly frequent and severe seasonal storms has led to the coastline being rapidly eroded.”

Dr Knecht added: “Since we started in 2009, the shoreline has retreated a full 10 metres. This is happening all around the arctic and because these were coastal people, the archaeological record is lost with it. But it’s not just an archaeological record – it’s one of the clearest records of the past that we know of anywhere in the north.”

Named ‘Nunalleq’ (meaning ‘the old village’) by village elders, discoveries at the site number tens of thousands and have included samples of human hair, ceremonial face masks and an ivory carving of a legendary river monster.

The dig has been carried out in full partnership with the local indigenous community. The pieces have been transported to the University of Aberdeen for preservation and archiving but remain the property of the people of Quinhagak and will be returned afterwards.

The Yup’ik didn’t come into contact with modern society until the 1820s. The area they live in, an area nearly three times the size of Scotland, remains one of the great unknown regions in North America, in terms of archaeology.

Dr Knecht added: “This is our first look at pre-contact Yup’ik life. It’s been a complete revelation to both scientists and the local native community.

“The discovery of these artefacts is helping to reintroduce lost skills back into these communities – the skills used to make them may have been lost and are being re-learned. We literally have pieces being recreated within days of being discovered.

“I think the dig is helping to get the local young people interested in their heritage. A group of youngsters recently asked the village elders for permission to form a traditional dance group – something that was suppressed by the missionaries more than a century ago. They did their first dance last year and the first song was about the storms washing the site away, and this year they did their first dance in Quinhagak itself – the first in 100 years – and they did it when we showed our summer’s finds to the community.”

It's quite incredible - leather, fur, plants, even 400-year-old grass that has been completely preserved intact because they've been frozen all this time." Dr Rick Knecht

The site was inhabited between 1300 and 1650, during the Little Ice Age (shortly after 1400), which was a period of rapid global climate change. As well as providing a fascinating account of how the Yup’ik people lived hundreds of years ago, the project is also relevant to bigger issues concerning climate change in general.

Dr Knecht added: “It’s ironic that climate change is bringing about this thaw, which in itself is helping us answer questions about how these people coped with climate change hundreds of years ago and may help us plan for similar conditions in the future.

“The site is a little time capsule that we can tap into, to infer changes that may happen in the future – with regards to the availability of different animal species, as climate shifts changes in animal behaviour, and how past humans responded to those changes.

“We’ve never had such a rich database to work with before. We have plant remains, insects, bones and human hair that can be analysed to tell us how local conditions were changing, how these people were living in the past, how their lives changed over the span of the Little Ice Age.

“Looking at the past will help us see what parts of the ecosystem are most sensitive to temperature change and hopefully provide a predictive model for what’s going to happen to the modern subsistence diet of animals and plants that people in this region are completely dependent on.”

As part of the project, Dr Britton is carrying out stable isotope analysis of hair samples from the site in conjunction with labs across Europe and Canada, in order to reconstruct diet amongst the ancient inhabitants of the site.

She said: “Cut strands of human hair, the waste from haircuts, were found all across the site, sitting on the preserved house floors – rather like the sweepings you get at a barber’s shop. By taking a long strand of hair we can sequentially sample it and get a month-by-month or even bi-monthly record of dietary change, so you get a year in the life of this individual, in terms of what they ate. What we found in the earliest phases of the site is that, despite the very seasonal nature of the availability of wild foods in this region, there seems to be very little change in dietary change throughout the year – a mixed diet of fish like salmon, caribou, and some marine mammals. The lack of variation in diet suggests they were preserving and storing the food and eating it all year around – this really attests to adaptations these early groups made to life in the arctic.

“Now we want to see how diet changed throughout the Little Ice Age. The grant will allow us to look more closely at the palaeoenvironment and food technologies at the site, such as pottery and hunting implements. We’ll combine this with the isotopes, and get a better look at how climate change influenced subsistence strategies and what made it onto the menu.”

The £1.1m grant from the Arts & Humanities Research Council will keep the dig going for another four years, but also fund local archaeological education and training initiatives and, importantly, a regional survey to find more sites under threat.

Dr Knecht said: “The grant is fantastic and will go a long way, but even with it, none of this would have been possible without the support and hard work of the Yup’ik people”.

Dr. Charlotta Hillerdal, also of the University of Aberdeen, is working with local groups and schools in Quinhagak as part of the project, a process that has been beneficial to both the local people and the archaeologists: “Working with the people of Quinhagak is a true partnership and it is a great privilege to be involved in this project.  As an archaeologist it’s great to see how archaeology can become a part of a living heritage, and witness the power these artefacts holds as cultural objects.

“Throughout this project it has become evident that archaeological remains and artefacts in Nunalleq and their fascinating tale have the ability to bring people together. Yup’ik Elders and youngsters, experienced archaeologists as well as students on their first dig exchange knowledge and share experiences. The artefacts evoke the memories of some and arouse the curiosity of others. They inspire stories that could otherwise not have been told and cultural meetings that without would not have taken place, as well as increase our own understanding of a fascinating Yup’ik past independent of colonial practices. The Nunalleq project has shown Yup’ik archaeological heritage to be dynamic and powerful and a great asset to the local community as well as to research.”

Dr Knecht added: “All the artefacts will be returned to the area and we’re looking to establish a local research centre and repository so the collections can be locally stored and archaeological site protection and rescue be expanded.

“What’s happening at Nunalleq, with climate change, will be repeated right across North America and into Greenland. Further north there are places in arctic coastlines that have lost a mile of coastline. That’s their entire archaeological record gone.

“There are many more sites like Nunalleq that we just can’t get to, or haven’t yet located, so part of the grant involves surveying the land to identify other sites and provide training to locals so they can take steps to preserve artefacts and record new sites in the future.”

Qanirtuuq, Inc., the village land owning corporation of the Yup’ik Eskimo village of Quinhagak, brought in archaeolgist Dr Rick Knecht and his team at the University of Aberdeen to undertake the first large scale archaeological investigation into the prehistory of this region with the aim of recording archaeological sites in the area threatened by rising sea levels.

The Yukon-Kuskokwim Delta, in Alaska, is the core of the Central Yup’ik culture area, and the Yupi’k living in this region today are the largest indigenous group of people living in south-western Alaska. First contacted by Europeans in the early 19th Century, historic Yup’ik culture is ethnographically well documented. However, the archaeology and prehistoric cultural roots of the region remain almost completely unknown; this is by far the largest archaeological excavation ever undertaken in the region.

In recent years, the effects of global warming, melting tundra and changes in winter ice coverage, has actualised the issue of this ‘missing’ Yup’ik prehistory, as prehistoric coastal sites are now eroding into the sea all along the Bearing Sea coast.

The site of Nunalleq is the product of one such erosion event in 2008, as priceless prehistoric objects were washing into the Bering Sea on this remote Alaska coast and being lost.

Although Inuit is often considered the ‘politically-correct’ term for indigenous Arctic communities (especially in Canada), the Bering Sea Yup’ik self-identify as ‘Eskimo’ – hence our description of their archaeological forbearers (and modern communities) as ‘Eskimo’.