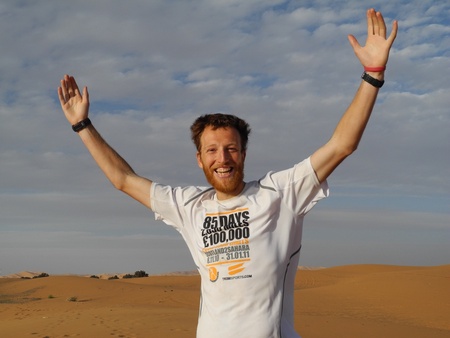 A former Aberdeen medical student, whose inspiring list of athletic accomplishments includes running from John O’Groats to the Sahara Desert, will share his experiences at a free event this week.

Expedition doctor and ultra marathon runner, Andrew Murray – who has been appointed as the Scottish Government’s Physical Activity Champion in the run up to the Olympics – will speak before an audience at Aberdeen Sports Village on Friday March 16.

He will provide an insight into his medical work which has taken him from the Himalayas to the North Pole and allowed him to study the effects of extreme conditions on some of the toughest athletes in the world.

He will also speak of the epic races he has completed since he began running in 2005.

His achievements include the John O’Groats to Sahara race which saw him cover 2659 miles – the equivalent of running over 101 consecutive marathons - in 77 days in aid of the Yamaa Trust, which helps the needy in Mongolia's South Gobi Province.

He has also ranked first in races in some of the world’s most extreme environments including the Arctic and Outer Mongolia, and climbed the highest peaks in Europe, Australia, South American and Africa.

A book chronicling his running - Running Beyond Limits: The Adventures of an Ultra Marathon Runner– was published last year.

Andrew’s role as the Scottish Government’s Physical Activity Champion is to promote the importance of physical activity and explore new ways to inspire people to get active.

For Andrew the event marks a return to his old University stomping ground – he studied medicine at the University of Aberdeen from 1998-2003.

Andrew, who was also born in Aberdeen, said: “In my talk I will give an insight into where my medical work and athletic endeavours have taken me over the last 7 years.

“I’ll be discussing the tools I use to motivate both myself and others to push themselves to their limits in the harshest conditions and explain my method for approaching the challenges I take on – from the meticulous planning that’s required to training and choosing the best team to provide expertise and support.

“It’s a welcome return for me coming back to the University of Aberdeen where I spent many happy years studying, and I look forward to sharing my experiences with the audience.”

On Saturday (March 17) Andrew will be one of the runners taking part in the Deeside Way Ultra Race which challenges entrants to run 33 miles along the Deeside Way, beginning at Duthie Park.

The event is free to attend but spaces are limited – call the Aberdeen Sports Village on 01224 438900 to book.

The talk takes place as part of a programme of events hosted by the University of Aberdeen to mark National Science and Engineering Week.

A host of activities, celebrating science, engineering and technology, are taking place across Aberdeen city and shire – for more information visit www.abdn.ac.uk/science/public/nsew/ .

The National Science and Engineering Week programme in Aberdeen and Aberdeenshire is sponsored by BP with additional support from the University of Aberdeen and the Scottish Government.