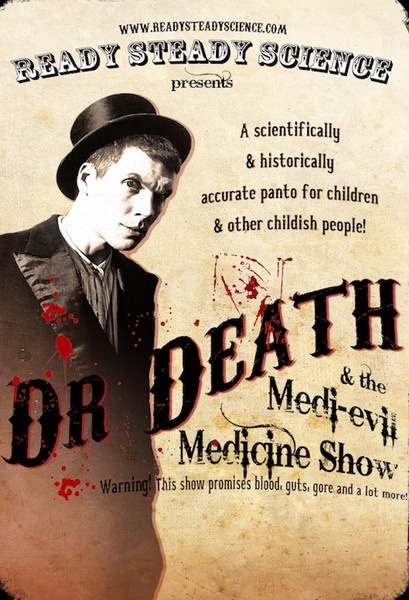 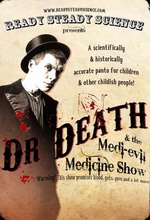 Did you know that bleeding was used as the main ‘treatment’ for the Black Death?

Or that once-upon-a-time the highly poisonous substance mercury, was actually thought to cure everything from a scraped knee to leprosy.

A unique free event, taking place at the University of Aberdeen next week, will offer a whirlwind trip through the entire history of medicine.

Simon Watt from Channel 4’s Inside Nature’s Giants and The Elephant: Life After Death is the creator and presenter of the one-man-show, entitled Dr Death and the Medi-Evil Medicine Show, which he describes as ‘a scientifically and historically accurate pantomime’.

“The aim is to take the audience on a fun and educational trip through the entire history of medicine,” Simon explained.

“Since the dawn of civilisation man has been engaged in a constant struggle to overcome sickness and disease, but in the past some of the treatments given to cure ailments could ironically have been worse than the underlying illness.

“The show gives an overview of key medical figures through the ages from Hippocrates, an ancient Greek physician acknowledged as the first ever doctor, to the man who changed the face of medicine when he discovered Penicillin - Professor Alexander Fleming.

“I’ll provide an insight into the various quirky and entirely bizarre cures that were once given as treatments.

“For example, for nearly 2000 years bleeding was diagnosed for most ailments - including the Black Death – with patients either having their veins cut open or being exposed to leeches - the rationale being that removing their blood would remove the ailment.

“Mercury was also used as a common treatment for a variety of illnesses from syphilis, to headaches and even madness, and powdered skulls were once thought to provide a cure for epilepsy.”

“A mixture of acting, puppetry and animation is used in the show and in same vein as a traditional pantomime, audience interaction is encouraged!”

The event marks the launch of the UK’s annual National Science and Engineering Week which will see a host of activities taking place across Aberdeen city and shire, celebrating science, engineering and technology.

The National Science and Engineering Week programme in Aberdeen and Aberdeenshire is sponsored by BP with additional support from the University of Aberdeen and the Scottish Government.

“From science in the street to the wonders of the Northern Lights, discovering more about the motion in our oceans and understanding how what we eat can impact on climate change – this year’s National Science and Engineering Week will offer audiences of all ages the chance to enjoy a fantastic, varied programme of events – many of which are free to attend.

“The aim is to inspire people to have fun with, and learn more about, the science that is all around us.

“Dr Death and the Medi-Evil Medicine Show provides a fascinating opening to the 10 day programme of activities and we’re delighted to host this show at the University and bring it to an Aberdeen audience for the first time.”

Dr Death and the Medi-Evil Medicine Show takes place at the University of Aberdeen’s King’s College Conference Centre on Friday March 9, from 7-8pm.

The event is free to attend but booking is essential – visit www.abdn.ac.uk/science/public/nsew/