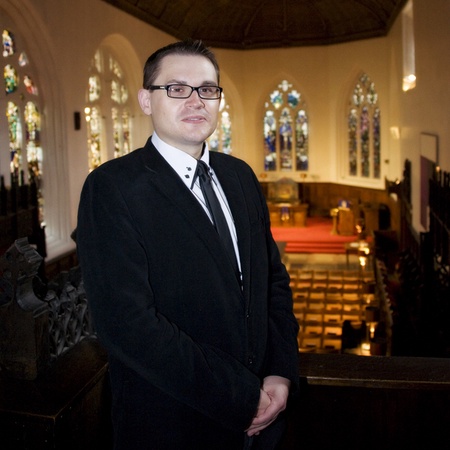 The work of an Aberdeen composer described as ‘the real hit’ of the Royal wedding will be performed in the Granite City.

Ubi Caritas by Paul Mealor, a professor of composition at the University of Aberdeen, was sung at the wedding of TRH The Duke and Duchess of Cambridge in April and it then soared to number 1 in the Classical Charts.

The performance, at King’s College Chapel, will be one of the highlights of the Aberdeen Music Prize weekend running from November 4-6.

This will include a wide programme of events culminating in the announcement of the winner of the 2011 Prize at a special gala concert in the Cowdray Hall at 6pm on Sunday November 6.

The biennial Aberdeen Music Prize is a collaboration between the University of Aberdeen and the BBC Scottish Symphony Orchestra (BBC SSO), under the patronage of Dame Evelyn Glennie.

The brainchild of Professor Mealor, the competition seeks to find the next big name in classical composition and attracted worldwide interest with more than 400 entries from 80 countries.

Winning the Prize, which comes with £5000 in the form of a commission to write a new piece for the BBC SSO which will subsequently be broadcast on BBC Radio 3, is likely to propel the winner to the international stage.

May Kay Yau, who took the 2009 title, is now making a name for herself with major commissions and performances all over the world.

Professor Mealor said he was delighted by the calibre of this year’s finalists, Shai Cohen from Israel, Zvonimir Nagy from the USA, Christophe Lootenfrom France, Marc Garcia Vitoria from Valencia, and Azusa Yomogida from Japan.

“The Aberdeen Music prize is a wonderful opportunity for up-and-coming composers and the quality of entrants for the 2011 competition is outstanding.

“I know firsthand the impact that reaching a global audience has on your career and the response I’ve had since Ubi Caritas was premiered at the Royal Wedding in April has been greater than I ever could have imagined.

“The Music Prize weekend offers something for everyone and we have once again teamed up with the sound festival to offer workshop sessions and weekend performances.

“I am looking forward to hearing Ubi Caritas performed by The Chapel Choir in the wonderful setting of King’s College Chapel.”

Other highlights of the weekend include a concert by the BBC Scottish Symphony Orchestra on Friday November 4 at the Music Hall, Union Street, composition workshops in the Cowdray Hall on Saturday November 5 and a performance by viola player Scott Dickinson at Migvie Church, Tarland.

On Sunday November 5, composer Professor Julian Anderson, who will judge this year’s Aberdeen Music prize, will present a selection of his own music and will be interviewed by Dr Edward Campbell, and the weekend will conclude with the gala concert announcing the 2011 winner of the Aberdeen Music prize.

Professor Pete Stollery, Head of the School of Education and co-Director of the sound festival said, "The Music Prize is now firmly established in the new music calendar and the University is proud to host the competition and to showcase some of the best composers in the world."

Gavin Reid, Director of the BBC Scottish Symphony Orchestra, said: "The BBC SSO has an international reputation for promoting new music and developing the work of young composers, and we're delighted to continue our partnership with the University of Aberdeen Music Prize."

Full details of the programme for the Aberdeen Music Prize weekend can be found at http://www.abdn.ac.uk/aberdeenmusicprize/

Ubi caritas was described by Michael White in the Independent as, ‘The real hit of the Wedding’ and by the Los Angeles Times as, ‘ethereal, deeply moving and heart-felt’.

About the Aberdeen Music prize finalists:

· Shai Cohenfrom Israel - the 2010 ‘Authors, Composers and Publishers Association’ winner for his work "Echoes of Eternity" - Fantasia for violin solo and orchestra.

Among the performers of his music are distinguished musicians and ensembles like the SNU Symphony Orchestra (Korea), the Moscow Contemporary Music Ensemble, and the Tokyo National University of Fine Arts and Music

Shai’s piece Circles of Time has won through to the final of the competition.

· Zvonimir Nagy from the USA is Assistant Professor of Musicianship Studies at Duquesne University in Pittsburgh.

Zvonimir‘s piece Ayreshas been selected for the final. Science, neuroscience, and the world of digital media are major influences on the composer’s work.

· Christophe Lootenfrom France is well known in the music world for developing the music scale called the bi-pentaphonic mode which allows a composer to use the atonal scale while maintaining the richness of the tonal scale which is normally used in composition.

Christophe, who has been composing since he was seven, will have his piece Quintet performed at the concert.

·25-year-old Marc Garcia Vitoria from Valencia, Spain, has been shortlisted for his piece Plastic Trio.

In 2007 he obtained the jury prize for his piece ‘L’union libre’ at the “6èmes rencontres internationales de composition musicale de Cergy-Pontoise”.

He recently received a commission for a piece for "Trio de Magia" by the "Insititut Valencià de la Música", and is now working on a new piece for "Ensemble Intercontemporain" to be premiered in October 2011.

·27-year-old Azusa Yomogida from Japan has been composing since she was 14. Autana III has won her a place in the final.

Her previous works include ‘The Bonfire’, a piano piece for four hands, and she recently performed in July 2011 IRCAM Stage Overview Program in Paris.