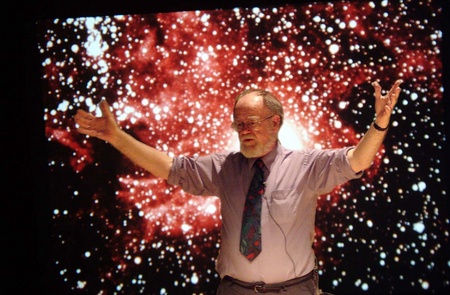 The future of space tourism and the scientific evidence for supermassive black holes – these will be amongst the topics up for discussion as a new public science series launches in Aberdeenshire.

Astronomer Royal for Scotland Professor John Brown will speak before an audience at Banchory’s Woodend Barn on Tuesday (February 16).

Some of astronomy’s most significant mysteries, theories and questions will be covered at the event which begins at 7pm and is free to attend.

Professor Brown is the tenth Astronomer Royal for Scotland and was appointed by the Queen in 1995.  He is also a Regius Professor of Astronomy at the University of Glasgow.

His talk launches the new Café Scientifique Shire series developed by the University of Aberdeen in partnership with TechFest-SetPoint.

Aiming to provide a public forum for debate around highly topical issues in science, Café Scientifique Shire will take place at Woodend Barn once a month until June.

Other topics set to be covered include:

The series is a spinout of the University’s Café Scientifique City which attracted full to capacity audiences to Waterstone’s in Aberdeen when it launched last year.

The success of the first series led to the programme being extended to take in the Aberdeenshire area.

Dr Ken Skeldon from the University of Aberdeen’s Public Engagement with Science Unit said:  “Professor Brown is a world leading authority in the area of Astrophysics and his talk – which will span a full spectrum of issues from space travel to black holes – promises to provide a fascinating start to the new Café Scientifique Shire series.

“The aim of Café Scientifique Shire is to provide the public with the chance to gain real insights from leading lights in the world of science and engage in discussion and debate.

“A wide range of topical issues will be covered over the course of the series which runs monthly until June.

“We warmly welcome anyone to come along and get involved in our discussions.”

Café Scientifique Shire is supported by the Scottish Government through a Science Engagement Award.