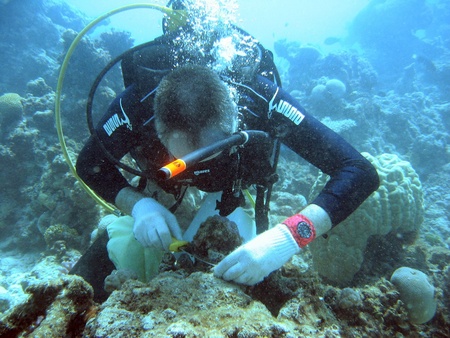 How natural resources buried in the depths of our oceans are being used in pioneering scientific developments will be highlighted at a free public event this week.

The deepsea and microscopic creatures and plants which are paving the way for new drugs to treat cancer and inflammatory diseases, household products and cosmetics, will be the focus of a talk by Professor Marcel Jaspars from the University of Aberdeen’s Marine Biodiscovery Centre.

The need to preserve these valuable resources will be highlighted at the event which takes place on Wednesday (January 20) at Waterstone’s Union Bridge Branch at 7pm.

Professor Jaspars said: “From helping develop the next wonder drug to creating environmentally friendly household products, creatures and plants buried deep in our oceans are driving important new discoveries in a number of scientific areas.

“The University of Aberdeen is at the forefront of this area of science with a new facility opening this year dedicated to work in this increasingly important research field.

“As one example of the work we are undertaking at the University, I will show sponges found in deep Fijian waters which we are currently testing to derive drugs for treatment of sleeping sickness - a potentially deadly parasitic disease.

“Although our oceans vast resources are playing a vital role in progressing science, we have barely scraped the surface in terms of tapping into their potential.

“More than 90% of all creatures existing in oceans worldwide are yet to be identified, and the actions of humans could be causing us to lose these valuable natural resources before we even fully understand what we are losing.

“In my talk I will also highlight the importance of working to retain the biodiversity in our oceans.”

Professor Jaspars talk – Sponges, Washing Powder and Cuddly Dolphins - is the first in a new season of the University of Aberdeen’s Café Scientifique series.

It also launches the University’s promotion of the International Year of Biodiversity which runs throughout 2010.

Hosted once a month until May in the Costa Coffee café in Waterstone's, Café Scientifique aims to provide a public forum for the discussion of highly topical issues in science.

Due to the popularity of the series two new strands of public science sessions have been added to the Café Scientifique events.

Café Med will see leading figures in medicine and biosciences discuss key health issues at the Suttie Centre for Teaching and Learning in Healthcare on the University’s Foresterhill campus.

Café ScientifiqueShire will bring hot debates in science to Banchory’s Woodend Barn, when it launches in February.

For more information on Professor Jaspars’ talk and for full listings of the three series programmes visit http://www.abdn.ac.uk/science/cafescience/  or contact Dr Ken Skeldon at k.skeldon@abdn.ac.uk .

All three Café Scientifique series are supported by the Scottish Government through a Science Engagement Award.