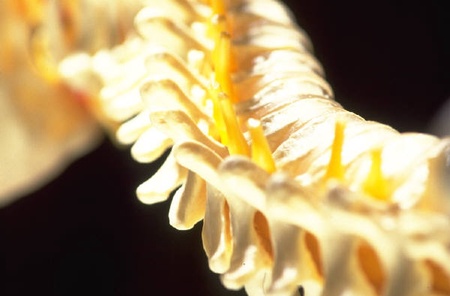 Groundbreaking research into a disease that affects around eight million people across the UK will be outlined to the public next week.

Osteoarthritis – a degenerative disease that attacks the joints – is the focus of the first in a brand new series of free public talks taking place at the University of Aberdeen’s Suttie Centre Café, and beginning this Monday (January 18) at 6pm.

One of the researchers from the University’s world leading bone group will discuss ongoing Aberdeen work which could lead to better treatments for the condition that affects almost half of people over 65, and is a major cause of pain and disability in the elderly.

Professor Richard Aspden will explain how the research group are taking some entirely new tacks with the disease - firstly by looking at the whole patient and all the joints affected, and secondly, using medical imaging in a novel way to track its progress.

“There is a desperate need for new approaches for tackling osteoarthritis, which can be extremely painful and debilitating,” said the Professor of Orthopaedic Science.

“Up until now the main focus has been on cartilage damage caused by the disease. However the University of Aberdeen is looking at a number of different aspects of the disease such as its links with obesity.

“Unfortunately the problem, which costs the economy billions of pounds a year on medical care, lost work days and social welfare, is only going to get worse with our ageing population.

“Yet a lot of the drug companies are pulling away from osteoarthritis because of the time and cost it takes to get a drug to market. Unlike measuring blood pressure or cholesterol, there are no good measures of osteoarthritis to use when testing the effects of drugs.

“One particular project we are excited about is our work with x-rays and a type of imaging called DXA scanning, more commonly used for osteoporosis, which is giving us new ways of measuring changes in the affected joints.

“Our findings could be of huge interest to a number of pharmaceutical companies that have brand new drugs in the pipeline,” added Professor Aspden.

Professor James Hutchison, Regius Chair of Surgery and Sir Harry Platt Chair of Orthopaedics at the University, and Consultant Orthopaedic Surgeon, NHS Grampian, is also involved in the first of these sessions which aim to show how research is helping develop new treatments for a host of medical conditions.

His part of Monday’s talk will include a look at the clinical features of the disease and past, current and future treatments.

Monday’s event is the first in the series of Cafe Med sessions which will let the public hear about the work of scientists and clinicians in tackling a host of medical conditions.

It will be introduced by Professor David Reid, Head of Division of Applied Medicine, who will give a brief overview of the Foresterhill site and the importance of collaborations between researchers and the NHS.

The Cafe Med events have been organised by the University’s Public Engagement with Science Unit.

Last year the Unit launched its Café Scientifique Aberdeen sessions where a wide range of topical issues were discussed by scientists and the public over coffee at the city’s main Waterstone’s store.

The events proved so popular that organisers decided to stage the Café Scientifique Waterstone’s sessions again, as well as the new Café Med strand and new Café Shire events which will take the public science sessions out to Banchory’s Woodend Barn.

Dr Ken Skeldon, from the Public Engagements with Science Unit, said: “We have a fantastic line up of speakers for our three different Café Scientifique sessions.

“Our first Café Med session focusing on osteoarthritis will be of interest to anyone affected by the disease as well as those who just want to know more about the groundbreaking research taking place on their doorstep.”

The Café Med sessions – like all the Café Scientifique events - are supported by a science engagement grant from the Scottish Government. Entry to sessions is free and open to all. Those interested in attending should just turn up on the night. For more information about the events see: http://www.abdn.ac.uk/science/cafescience/