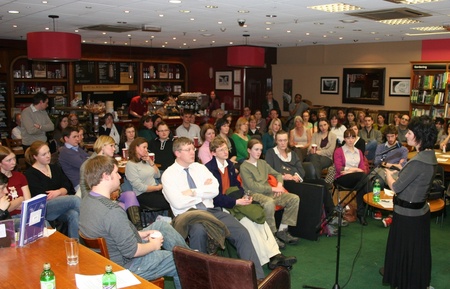 A free public science series will return this month with an extended programme of events.

The University of Aberdeen’s Café Scientifique series launched last January, aiming to provide a public forum for the discussion of highly topical issues in science.

The inaugural series attracted full to capacity audiences to Waterstone’s Union Bridge branch in Aberdeen to hear from acclaimed and high profile scientists such as Chief Scientific Adviser for the Scottish Government, Anne Glover.

Due to the popularity of the series, a further two strands of events have been added to this year’s line up.

While Café Med will see leading figures in medicine and biosciences discuss key health issues at the Suttie Centre for Teaching and Learning in Healthcare on the University’s Foresterhill campus.

These new events will run alongside Café Scientifique City which will return to Waterstone’s Union Bridge branch.

Dr Ken Skeldon from the University of Aberdeen’s Public Engagement with Science Unit who spearheads the Café Scientifique series said:  “Since its launch a year ago, Café Scientifique has proved hugely popular, clearing tapping into a public appetite to discuss and debate topical issues in science in a relaxed and informal setting.

“The introduction of Café Med and Café Scientifique Shire allows us to extend the series to include a wider audience and subject matter.”

Café Med will launch on Monday January 18 at 6pm in the café area of the Suttie Centre for Teaching and Learning in Healthcare, Foresterhill,  Aberdeen.

Professor Richard Aspden and Professor James Hutchison from the University of Aberdeen’s College of Life Sciences and Medicine will look at osteoarthritis and the research which is leading to better treatment of this debilitating disease.

Cafe Scientifique City will kick off on Wednesday January 20 at 7pm in the Costa café in Waterstone’s Union Bridge Branch, Aberdeen with a talk by Professor Marcel Jaspars from the University of Aberdeen’s Marine Biodiscovery Centre.

Professor Jaspars will look at the natural resources buried in the depths of our oceans which could have a profound impact on our lives – by for example forming the basis for vital medical drugs.   He will look at how the actions of humans could be causing us to lose these natural resources – sometimes before they are even identified – and discuss exactly what we could be losing.

Café Scientifique Shire will launch on Tuesday February 16 at 7pm in Buchanan’s café in Woodend Barn, Banchory with Astronomer Royal for Scotland, Professor John Brown providing an insight into black holes, interstellar travel and the origins of universes.

Other highly topical issues in science which will be covered across the three series include:

Dr Skeldon said: “Over the three series a diverse range of hot topics in the world of science and health will be covered, giving the public a unique chance to gain real insights and take part in discussions with leading academics.

“With a fantastic line up of engaging topics, this year’s Café Scientifique series promises to be another prime opportunity for the public to get involved in lively scientific debates.”

Advance booking is not required for any of the events.

All three Café Scientifique series are supported by the Scottish Government through a Science Engagement Award.