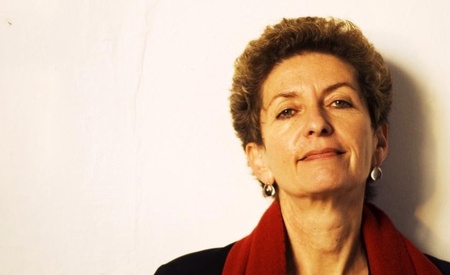 Renowned Austrian filmmaker Ruth Beckermann will be coming to the University of Aberdeen's May Festival for a film screening, followed by a Q&A, of her latest award-winning and critically-acclaimed film The Waldheim Waltz.

This special Director’s Cut event, which is being hosted as part of the VIEW programme of the University’s George Washington Wilson Centre for Visual Culture, presents a rare opportunity to interact with one of the leading documentary filmmakers in Europe today.

The event is being organised by Dr Katya Krylova, Lecturer in German, Film and Visual Culture, and Co-Director of the GWW Centre for Visual Culture, who has written extensively on Ruth Beckermann’s films and visual art projects in the context of postwar Austrian memory culture.

Beckermann’s latest film The Waldheim Waltz (2018), which will be screened at the May Festival event, deals with the international scandal sparked in the late 1980s by former UN Secretary General and then Austrian president Kurt Waldheim’s deception about his Nazi past. The film has won a host of international awards, including the Berlin International Film Festival 2018 Glashütte Original Documentary Award, and the 2019 Austrian Film Prize for Best Documentary Film.

In interviews, Ruth Beckermann has repeatedly stressed the topicality of The Waldheim Waltz, calling it 'a film about truth and lies or "alternative facts"'.

Ruth Beckermann’s career as a director spans more than four decades. She made her first documentary films in the late 1970s, with these first films focusing on protest movements and industrial relations in Austria. Beginning with her first feature film (co-directed with Josef Aichholzer), Return to Vienna (1983), Beckermann’s films have been insistently preoccupied with the subject of Austrian history and memory, and the legacy of the Second World War and the Holocaust.

In her acclaimed 1996 documentary East of War, she interviewed former Wehrmacht soldiers attending an exhibition on the crimes perpetrated by the Wehrmacht on the Eastern front. The issue of Austrian guilt and complicity in the crimes of the Third Reich is once again a key concern in The Waldheim Waltz, a film which incorporates rare archive footage in its exploration of Kurt Waldheim’s denial of his wartime activities and repeated assertions that he had “only done his duty”.

The screening of The Waldheim Waltz and Q&A with Ruth Beckermann presents a rare opportunity to interact with one of the foremost documentary filmmakers of our time, and a truly inspirational person and director." Dr Katya Krylova

Beckermann’s extensive filmography also includes The Paper Bridge, Towards Jerusalem, A Fleeting Passage to the Orient, Homemad(e), Zorro’s Bar Mitzvah, American Passages, Those Who Go Those Who Stay, and her first fiction film The Dreamed Ones (2016), focusing on the love story of the celebrated postwar European poets Ingeborg Bachmann and Paul Celan.

The special Director’s Cut May Festival screening of The Waldheim Waltz, followed by a Q&A with Ruth Beckermann, chaired by Dr Krylova, will take place on Saturday 25 May, at 3pm in King’s College Conference Centre Auditorium. The event is FREE to attend and no booking is required. Further information is available on the Director’s Cut webpage and via the May Festival website.

The event has been made possible thanks to the generous support of the George Washington Wilson Centre for Visual Culture, the Austrian Cultural Forum London, the Ingeborg Bachmann Centre at the Institute of Modern Languages Research London, and the University of Aberdeen. The screening and Q&A will form part of the 11th series of the Director’s Cut programme, which features leading and innovative filmmakers.

Dr Krylova said: “The screening of The Waldheim Waltz and Q&A with Ruth Beckermann at this year’s May Festival presents a rare opportunity to interact with one of the foremost documentary filmmakers of our time, and a truly inspirational person and director. I encourage everyone to seize this opportunity and to attend this very special event”.