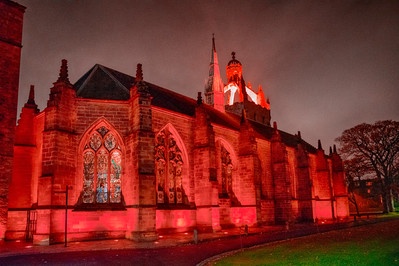 The University will pay tribute to the 342 staff, students and alumni who fell during the First World War on Sunday with named crosses on Elphinstone Lawn.

The institution will also lead the music of peace on the global stage with Professor Paul Mealor’s Requiem 'The Souls of the Righteous' to be performed in New York’s famous Carnegie Hall and broadcast on Classic FM as part of their commemorations.

At 3pm musicians from all over the world will strike up to Play for Peace as part of an initiative led by the University’s Neil McLennan to create a new and lasting form of remembrance.

A crowdsourced international orchestra will play a new piece by fiddler Thoren Ferguson which will be led by a concert at Edinburgh Napier University.

On campus, the crosses will be laid out following the Remembrance Day service in the Chapel, when the University’s Officer Training Corps (OTC) will also be presented and inspected.

Each cross will bear the name of one of those listed on the University war memorial in King’s College Chapel. The memorial, which was completed in 1928, is made up of 28 oak panels and was designed by William Kelly (1861 – 1944), one of Aberdeen’s most distinguished architects.

University chaplain Marylee Anderson said the crosses represented an important visual symbol of the impact of the war on the University community.

“To see the 341 crosses laid out on Elphinstone Lawn will bring home the devastating effect that the First World War had upon the University of Aberdeen community, an impact felt in villages and towns the length and breadth of the UK,” she said.

“We felt that in this centenary year of the armistice it was important to take time to reflect upon the great cost of war.

“The crosses will be laid out so that they can form part of the inspection of the OTC following our Remembrance Service and will be left out so that staff, students and visitors to the University can see them in the coming days.

“King’s College Chapel has also been lit up red in the lead up to the centenary of the armistice and the two will make a poignant tribute here on campus to all those who lost their lives.”

Many of those named on the crosses died on or around September 25 1915 when the University’s own U-Company, which formed part of the 1st and 4th battalion of the Gordon Highlanders, saw action at the Battle of Loos.

Many of its ‘student soldiers’ were killed or wounded in the days of fighting that followed at Hooge, near Ypres, during what was a diversionary attack to deflect attention from the main assault at Loos.

So heavy were the losses that following the battle U-Company ceased to exist with most of the survivors from the unit either returning to their studies at the University after being declared medically unfit or drafted into other regiments.

The Remembrance Service will take place at King’s College Chapel at 10.50am with members of the congregation asked to be seated by 10.30am. All are welcome to attend.

The University has also made its Roll of Honour available online. It is a publically available and searchable database containing the war records of some 2,852 members of the University Community from the Great War.