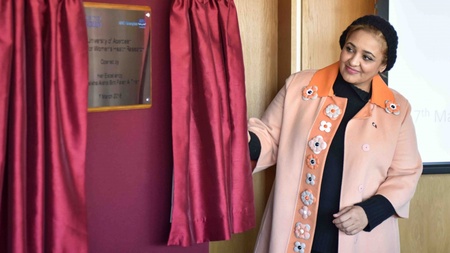 Dr Sheikha Aisha is the chairperson and founder of Al Faleh Educational Group which has made its mark in Qatar as a pioneering educational entity.

AFG College with the University of Aberdeen was launched in 2017 as the first British university offering undergraduate degrees in Qatar.

Dr Sheikha Aisha is on an official visit to the city where she will also participate in an event on Thursday to celebrate International Women’s Day. On Wednesday Her Excellency received a tour of the Foresterhill campus including demonstrations by students, explanations of research strengths and a look at the new Rowett facility.

The Centre for Women’s Health Research Centre will be based in the forthcoming £167 million Baird Family Hospital and Anchor Centre within the Foresterhill health campus.

The University of Aberdeen has championed the transformation of women’s health care for decades through the pioneering work of Regius Professor of Obstetrics and Gynaecology, Professor Sir Dugald Baird. As well as establishing the MRC Obstetric Medicine Unit, and later the MRC Medical Sociology Unit, Professor Baird was an advocate for the use of routinely collected maternity data in answering key clinical questions, and building on this he initiated the Aberdeen Maternity and Neonatal Databank (AMND).

The AMND is a unique body of information which traces the health changes and challenges faced throughout the lives of women in the North-East; fertility, family planning, pregnancy complications, maternal health, pelvic floor and menstrual disorders, endometriosis, cervical screening, and postmenopausal health. These population -based observational studies, teamed with innovative methodological skills in randomised clinical trials, have allowed the Aberdeen’s Women Health Research Group to undertake clinical studies which have improved healthcare for women across the world.

With dedicated facilities within the new Baird Family Hospital, the Aberdeen’s Women Health Research Centre will bring together clinical and non-clinical researchers alongside the clinical team to generate the answers to important questions in women’s health by research and evaluate its implementation into personalised clinical care.

To expand scope and collaborations, the centre will attract world-class academic clinicians to new key posts, each with a research team, supporting their programme of ground-breaking work. From the Women’s Health Research Centre, our researchers will be able deliver an exciting programme of investigation and exploration focused on those areas of healthcare practice with the potential to bring the greatest benefits to women and their families.

To see Dr Sheikha Aisha at the International Women's Day event at the University of Aberdeen on Thursday March 8 click here.